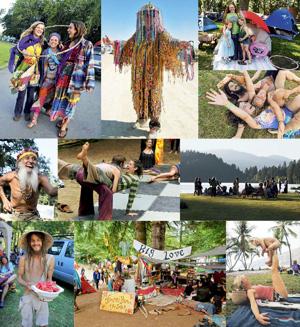 Via PASATIEMPO
The Santa Fe New Mexican
Friday, October 30, 2015
Paul Weideman
The famous counterculture of the 1960s always had two lifestyles, one urban and the other more oriented to quiet, country living — including in pioneering communes in New Mexico and elsewhere. Half a century later, a contemporary hippie movement flourishes in hundreds of eco-villages, and its members come together for the annual Rainbow Gathering and other summer festivals.

Photographer Steve Schapiro offers a revelation of modern hippie humanity in his new book, Bliss: Transformational Festivals & the Neo Hippie (powerHouse Books, 2015). At gatherings in California, Oregon, Nevada, Michigan, Minnesota, and Hawaii, he captured people dancing, meditating, chanting, hugging, and blissing out on the sky and earth and one another.
Need an online subscription?
The journalistic photographer’s portfolio includes covers for Vanity Fair, Time, Sports Illustrated, Life, Look, Paris Match, and People. His books include American Edge, Taxi Driver, and Then and Now. Over the years, Schapiro has documented cultural milestones, such as the civil rights movement, Chuck Berry playing on the Hullabaloo TV show, and outtakes of actors on the set of The Godfather. He photographed Martin Luther King Jr., the Kennedys, ballplayer Satchel Paige, and Andy Warhol.
He also took pictures of the original hippies in San Francisco’s Haight-Ashbury neighborhood and throughout America. The new photos are strikingly similar. Some commonalities are lots of hair and clothes — either multicolored or absent. There is a focus in the new series on the “bliss ninnies” subculture, whose participants chase ecstasy with meditation and dancing. Rather than experimentation with psychedelic drugs, the emphasis is on yoga, prayer, movement, and a vegan diet. “There are more communes in America now than there ever were in the ’60s,” Wavy Gravy declares in the book’s afterword. “Check out Communities magazine for a listing near you! Just follow your bliss and kiss the ground.”