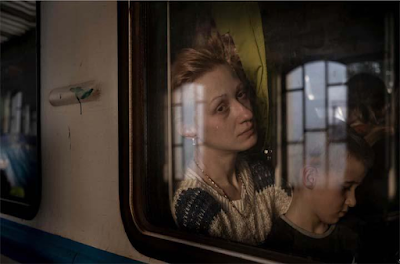 "March 15, 2022. Two of the millions of refugees fleeing the war in Ukraine, this woman and her son leave for Poland and a completely unpredictable future. Lviv is one of the funnel points for people trying to get out of the country. I just finished several days photographing these refugees, tracing their steps to the border and beyond.

The escape from Ukraine has become increasingly desperate. More than 2.6 million people have fled the country as Russian troops move closer to major metro areas, shelling civilian infrastructure at random and forcing people to find last-minute transportation to take them to safety.

Train stations are constantly crowded. Aid groups are meeting civilians with food, water and donated clothes. Polish families are taking in Ukrainian refugees, offering up their homes as temporary shelters. The U.S. so far has donated over $100M to help Ukrainians by providing safe drinking water, sanitation and hygiene supplies as well as surgical kit"s. --David Butow

Photographer David Butow, a longtime subscriber and contributor to DART, arrived in Ukraine the second week of March to cover the effects of war on ordinary people who were caught in the indiscriminate shelling of cities like Lviv and Chernevo. He covered the growing humanitarian crisis amid the escalating attacks, with people seeking shelter in makeshift camps in Poland, Moldova and Romania. David departed earlier this week through Poland; following are some of his photos and reportage for @politico (click for full article)