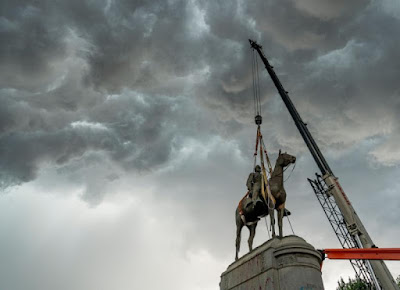 Sanjay Suchak: Removing Jackson, Richmond, Virginia, July 1, 2020
RICHMOND, Va. — As Devon Henry and his construction team take down the last remnants of statues that long dotted this former capital of the Confederacy, they have developed a grim game.

Random passers-by, some in vehicles, others on foot, often make known their disapproval of Mr. Henry’s work — so often, in fact, that Mr. Henry, who is Black, began to keep count of the many times he or a Black crew member were called an incendiary racial slur.

The count is 72 and climbing, according to Mr. Henry, who has emerged as the go-to statue remover not only for this city, but for all of Virginia and other parts of the South. (Full article)
Monroe Gallery will exhibit Sanjay Suchak's photographs at the AIPAD Photography Show in New York May 20 - 22 in booth #113