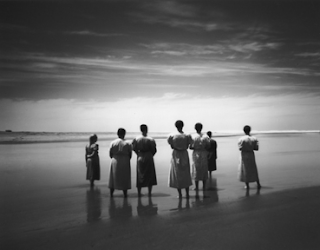 Santa Fe (June 13, 2012)—Mysterious, artistic, and as low-tech as an oatmeal box, pinhole photography has captivated everyone from schoolchildren to professional photographers for more than a century. The Pinhole Resource Archives, the world’s largest collection of images, books and cameras, just joined New Mexico’s largest archive of photography, the Palace of the Governors Photo Archives at the New Mexico History Museum.
The collection was a donation from Pinhole Resource Inc., which is based in New Mexico and led by Eric Renner and Nancy Spencer.
“In looking at other possible repositories for the Pinhole Resource Collection, we felt the Palace of the Governors Photo Archives had a tremendous web presence, which would make the collection accessible to people worldwide,” Renner and Spencer said in a prepared statement. “In addition, with the staff’s enthusiasm and interest in pinhole images we felt the collection would have a good home here in New Mexico."
The Photo Archives has already digitized hundreds of the images, which can be searched here (http://econtent.unm.edu/cdm4/indexpg.php ); click on “Browse Pinhole Resource Collection” or type the word “Pinhole” into the search box. In 2014, the museum will mount an exhibition, Poetics of Light, celebrating pinhole photography.
“The Photo Archives and the state of New Mexico is fortunate to be the repository for this world-class collection of pinhole photography. There is no other collection like it and is a tremendous addition to the resources made available to the public through the Photo Archives,” said archivist Daniel Kosharek.
Even in this digital age, pinhole photography remains an intriguing medium. Its popularity has been celebrated every April since 2001 with Worldwide Pinhole Photography Day. The 2010 event drew 3,387 images from 67 countries.
An exhibition of images from this unparalleled collection of pinhole photographs, representing images from New Mexico and around the world, is scheduled for April 2014 at the New Mexico History Museum. Poetics of Light will coincide with Worldwide Pinhole Photography Day.
In the 5th century BC, a Chinese philosopher noted the inverted image produced through a pinhole—an effect that led to development of the camera obscura and serves as the fundamental quality of pinhole photography. Renaissance artists Leonardo da Vinci, Filippo Brunelleschi, and Leon Battista Alberti advanced the knowledge of pinhole camera obscura imagery, creating a basis and understand of one-point perspective. In 1850, Sir David Brewster, a Scottish scientist, took the first photograph with a pinhole camera. By the mid-1980s, a variety of pinhole cameras could be purchased by anyone who wanted to create images without creating the camera.
In its most simple description, a pinhole camera is a lens-less camera with a small aperture. The interior of the “camera” (which can be, yes, an oatmeal box…or a traffic cone…or the human mouth…) contains a piece of film that records the projected image over periods of time that can range from a second to a year.
Pinhole Resource Inc., a nonprofit organization dedicated to pinhole photography across the globe, was formed in New Mexico in 1984 by Eric Renner. He began working in pinhole photography in 1968, while teaching three-dimensional design for the State University of New York at Alfred. Images from his 6 pinhole panoramic camera were shown in the first exhibition of the Visual Studies Workshop Gallery in Rochester, New York. Consequently, one of Renner’s images was included in the Time-Life Series The Art of Photography, 1971. Through exhibitions and workshops, he met pinhole artists throughout the world and worried that their work might become as lost as the thousands of images taken during the Pictorial Movement from the late 1880s to early 1900s.
After forming the nonprofit, he created the Pinhole Journal, and in 1989 was joined by Nancy Spencer, co-director of Pinhole Resource and co-editor of the journal, which ceased publication in 2006. Their collections included images from Europe, the Mideast, Asia and the Americas, books about pinhole photography, and dozens of pinhole cameras, one of which dates back to the 1880s.
The Palace of the Governors Photo Archives contains more than 800,000 prints, cased photographs, glass plate negatives, stereographs, photo postcards, lantern slides and more. Almost 20,000 images can be keyword searched on its website. The materials date from approximately 1850 to the present and cover the history and people of New Mexico from some of the most important 19th- and 20th-century photographers of the West—Adolph Bandelier, George C. Bennett, John Candelario, W.H. Cobb, Edward S. Curtis, Charles Lindbergh, Jesse Nusbaum, T. Harmon Parkhurst, Ben Wittick, and many others.
The Archives actively seeks material from contemporary photographers as well in order to document the past 50 years of visual history in New Mexico. Recent acquisitions include works by Jack Parsons, Herbert A. Lotz, Tony O’Brien, Steve Fitch, David Michael Kennedy, John Willis, Ann Bromberg, and Cary Herz.
Image: Top, "Community," by Linda Pearson, 2002. Palace of the Governors Photo Archives HP.2012.15.357.
Media contact: Kate Nelson, Public Relations and Marketing
New Mexico History Museum/Palace of the Governors
(505) 476-1141; (505) 554-5722 (cell)
kate.nelson@state.nm.us
http://media.museumofnewmexico.org/
The New Mexico History Museum is the newest addition to a campus that includes the Palace of the Governors, the oldest continuously occupied public building in the United States; Fray Angélico Chávez History Library; Palace of the Governors Photo Archives; the Press at the Palace of the Governors; and the Native American Artisans Program. Located at 113 Lincoln Ave., in Santa Fe, NM, it is a division of the Department of Cultural Affairs.
﻿