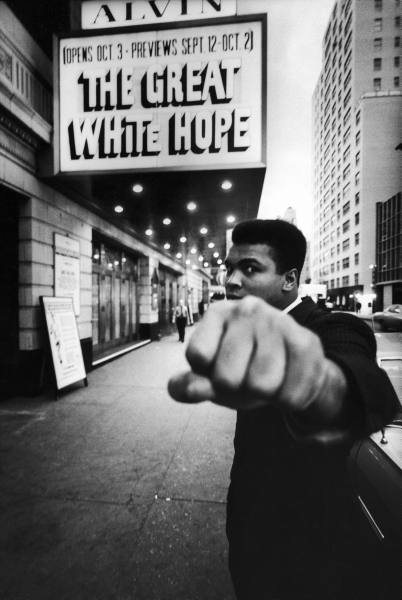 
Houston, April 28 (1967)--Cassius Clay refused today, as expected, to take the one step forward that would have constituted induction into the armed forces. There was no immediate Government action.

Although Government authorities here foresaw several months of preliminary moves before Clay would be arrested and charged with a felony, boxing organizations instantly stripped the 25-year- old fighter of his world heavyweight championship.

"It will take at least 30 days for Clay to be indicted and it probably will be another year and a half before he could be sent to prison since there undoubtedly will be appeals through the courts," United States Attorney Morton Susman said.

Clay, in a statement distributed a few minutes after the announcement of his refusal, said:
"I have searched my conscience and I find I cannot be true to my belief in my religion by accepting such a call." He has maintained throughout recent unsuccessful civil litigation that he is entitled to draft exemption as an appointed minister of the Lost-Found Nation of Islam, the so- called Black Muslim sect.

Clay, who prefers his Muslim name of Muhammad Ali, anticipated the moves against his title in his statement, calling them a "continuation of the same artificially induced prejudice and discrimination" that had led to the defeat of his various suits and appeals in Federal courts, including the Supreme Court.

Hayden C. Covington of New York, Clay's lawyer, said that further civil action to stay criminal proceedings would be initiated. If convicted of refusal to submit to induction, Clay is subject to a maximum sentence of five years imprisonment and a $10,000 fine.

Mr. Covington, who has defended many Jehovah's Witnesses in similar cases, has repeatedly told Clay during the last few days, "You'll be unhappy in the fiery furnace of criminal proceedings but you'll come out unsinged."

As a plaintiff in civil action, the Negro fighter has touched on such politically and socially explosive areas as alleged racial imbalance on local Texas draft boards, alleged discriminatory action by the Government in response to public pressure, and the rights of a minority religion to appoint clergymen.

As a prospective defendant in criminal proceedings, Clay is expected to attempt to establish that "preaching and teaching" the tenets of the Muslims is a full-time occupation and that boxing is the "avocation" that financially supports his unpaid ministerial duties.

Today, Clay reported to the Armed Forces Examining and Entrance Station on the third floor of the Federally drab United States Custom House a few minutes before 8 A.M., the ordered time. San Jacinto Street, in downtown Houston, was already crowded with television crews and newsmen when Clay stepped out of a taxi cab with Covington, Quinnan Hodges, the local associate counsel, and Chauncey Eskridge of Chicago, a lawyer for the Rev. Martin Luther King, as well as for Clay and others.

Half a dozen Negro men, apparently en route to work, applauded Clay and shouted: "He gets more publicity than Johnson." Clay was quickly taken upstairs and disappeared into the maw of the induction procedure for more than five hours.

Two information officers supplied a stream of printed and oral releases throughout the procedure, including a detailed schedule of examinations and records processing, as well as instant confirmation of Clay's acceptable blood test and the fact that he had obeyed Muslim dietary strictures by passing up the ham sandwich included in the inductees' box lunches.

Such information, however, did not forestall the instigation, by television crews, of a small demonstration outside the Custom House. During the morning, five white youngsters from the Friends World Institute, a nonaccredited school in Westbury, L.I., who had driven all night from a study project in Oklahoma, and half a dozen local Negro youths, several wearing Black Power buttons, had appeared on the street.

Continuous and sometimes insulting interviewers eventually provoked both groups, separately, to appear with signs. The white group merely asked for the end of the Vietnam war and greater efforts for civil rights.

The Negro eventually swelled into a group of about two dozen circling pickets carrying hastily scrawled, "Burn, Baby, Burn" signs and singing, "Nothing kills a nigger like too much love." A few of the pickets wore discarded bedsheets and table linen wound into African-type garments, but most were young women dragged into the little demonstration on their lunch hours.

There was a touch of sadness and gross exaggeration throughout the most widely observed noninduction in history. At breakfast this morning in the Hotel America, Clay had stared out a window into a dingy, cold morning and said: "Every time I fight it gets cold and rainy. Then dingy and cool, no sun in sight nowhere."

He had shrugged when Mr. Hodges had showed him an anonymously sent newspaper clipping in which a photograph of the local associate counsel had been marked "Houston's great nigger lawyer."

Sadly, too, 22-year-old John McCullough, a graduate of Sam Houston State College, said: "It's his prerogative if he's sincere in his religion, but it's his duty as a citizen to go in. I'm a coward, too."

Then Mr. McCullough, who is white, went up the steps to be inducted. He was one of the 46 young men, including Clay, who were called to report on this day.

For Clay, the day ended at 1:10 P.M. Houston time, when Lieut. Col. J. Edwin McKee, commander of the station, announced that "Mr. Muhammad Ali has just refused to be inducted."

In a prepared statement, Colonel McKee said that notification of the refusal would be forwarded to the United States Attorney General's office, and the national and local Selective Service boards. This is the first administrative step toward possible arrest, and an injunction to stop it had been denied to Clay yesterday in the United States District Court here.

Clay was initially registered for the draft in Louisville, where he was born. He obtained a transfer to a Houston board because his ministerial duties had made this city his new official residence. He had spent most of his time until last summer in Chicago, where the Muslin headquarters are situated, in Miami, where he trained, or in the cities in which he was fighting.

After Colonel McKee's brief statement, Clay was brought into a pressroom and led into range of 13 television cameras and several dozen microphones. He refused to speak as he handed out Xeroxed copies of his statement to selected newsmen, including representatives of the major networks, wire services and The New York Times.

The statement thanked those instrumental in his boxing career as well as those who have offered support and guidance, including Elijah Muhammad, the leader of the Muslims; Mohammed Oweida, Secretary General of the High Council for Islamic Affairs, and Floyd McKissick, president of the Congress of Racial Equality.

The statement, in part, declared:

"It is in the light of my consciousness as a Muslim minister and my own personal convictions that I take my stand in rejecting the call to be inducted in the armed services. I do so with the full realization of its implications and possible consequences. I have searched my conscience and I find I cannot be true to my belief in my religion by accepting such a call.

"My decision is a private and individual one and I realize that this is a most crucial decision. In taking it I am dependent solely upon Allah as the final judge of these actions brought about by my own conscience.

"I strongly object to the fact that so many newspapers have given the American public and the world the impression that I have only two alternatives in taking this stand: either I go to jail or go to the Army. There is another alternative and that alternative is justice. If justice prevails, if my Constitutional rights are upheld, I will be forced to go neither to the Army nor jail. In the end I am confident that justice will come my way for the truth must eventually prevail.

"I am looking forward to immediately continuing my profession.

"As to the threat voiced by certain elements to 'strip' me of my title, this is merely a continuation of the same artificially induced prejudice and discrimination.

"Regardless of the difference in my outlook, I insist upon my right to pursue my livelihood in accordance with the same rights granted to other men and women who have disagreed with the policies of whatever Administration was in power at the time.

"I have the world heavyweight title not because it was 'given' to me, not because of my race or religion, but because I won it in the ring through my own boxing ability.

"Those who want to 'take' it and hold a series of auction-type bouts not only do me a disservice but actually disgrace themselves. I am certain that the sports fans and fair-minded people throughout America would never accept such a 'title-holder.'"

Clay returned to his hotel and went to sleep after the day's activities. He is expected to leave the city, possibly for Washington, in the morning.