49 Years Ago: February 7, The Beatles Arrive in America 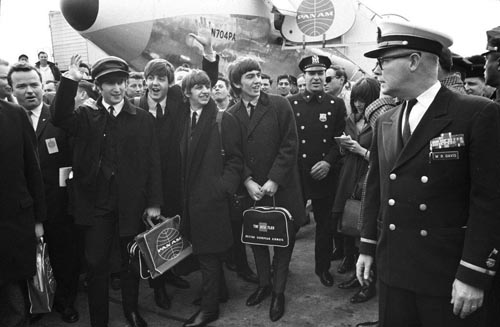 "One morning my boss said, 'Look, we've got a bunch of British musicians coming into town. They're called the Beatles.'"

Eppridge was at John F. Kennedy airport on February 7, 1964 for the arrival of The Beatles. He continued to photograph The Beatles that day, and over the next several days. He was invited to come up to their room at the Plaza Hotel and "stick with them."

"These were four very fine young gentlemen, and great fun to be around," Eppridge recalls. After he introduced himself to Ringo, who consulted with John, the group asked what he wanted them to do while being photographed for Life. "I'm not going to ask you to do a thing," was Eppridge's reply. "I just want to be here."

Traveling with the Beatles, forced by a snowstorm to take the train to Washington, Eppridge captured some wonderfully fun and memorable pictures. He was with them in Central Park and at the Ed Sullivan Show for both the rehearsal and the historic performance, and photographed their Carnegie Hall performance on February 12, 1964.
﻿