The first Freedom Ride took place on May 4, 1961 when seven blacks and six whites left Washington, D.C., on two public buses bound for the Deep South. They intended to test the Supreme Court's ruling in Boynton v. Virginia (1960), which declared segregation in interstate bus and rail stations unconstitutional.


In the first few days, the riders encountered only minor hostility, but in the second week the riders were severely beaten. Outside Anniston, Alabama, one of their buses was burned, and in Birmingham several dozen whites attacked the riders only two blocks from the sheriff's office. With the intervention of the U.S. Justice Department, most of CORE's Freedom Riders were evacuated from Birmingham, Alabama to New Orleans. John Lewis, a former seminary student who would later lead SNCC and become a US congressman, stayed in Birmingham. 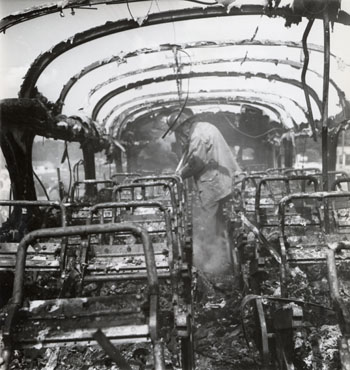 Joseph Postiglione
(Collection of the Birmingham Civil Rights Institute)
The aftermath of a mob attack on a Freedom Ride bus in Anniston, Alabama
CORE Leaders decided that letting violence end the trip would send the wrong signal to the country. They reinforced the pair of remaining riders with volunteers, and the trip continued. The group traveled from Birmingham to Montgomery without incident, but on their arrival in Montgomery they were savagely attacked by a mob of more than 1000 whites. The extreme violence and the indifference of local police prompted a national outcry of support for the riders, putting pressure on President Kennedy to end the violence.

The riders continued to Mississippi, where they endured further brutality and jail terms but generated more publicity and inspired dozens more Freedom Rides. By the end of the summer, the protests had spread to train stations and airports across the South, and in November, the Interstate Commerce Commission issued rules prohibiting segregated transportation facilities.  (via CORE)

More: It’s been 50 years now, but there are times when Charles Person still finds it hard to talk about the summer of 1961 without his voice breaking.