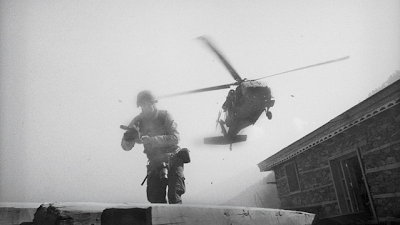 Tim Hetherington takes cover as a US Black Hawk helicopter lands on a rooftop during 'Operation Rock Avalanche' in the Korengal Valley, Afghanistan on October 20, 2007. Photo: Balazs Gardi

Conflict photographers have the opportunity to create powerful and enduring images that can live on to define a time period — the downside is that they typically have to put themselves in harm's way to do so. Tim Hetherington, one of the more famous conflict photographers in recent memory, was killed while covering the front lines of Libyan city Misrata in April of 2011; now, his story will be told by his friend and filmmaker Sebastian Junger in Which Way is the Front Line From Here: The Life and Time of Tim Hetherington. Junger previous worked with Hetherington on Restrepo, a documentary about the Afghanistan war that premiered just before Hetherington's death.
The documentary, which was shown at this year's Sundance Film Festival, will make its HBO debut on April 18th. Judging from the quick trailer HBO has just released, we're expecting the documentary to be a moving tribute to an excellent photographer that also speaks to the power of the medium itself. For more about the film and Hetherington's career, check out this profile from Outside.