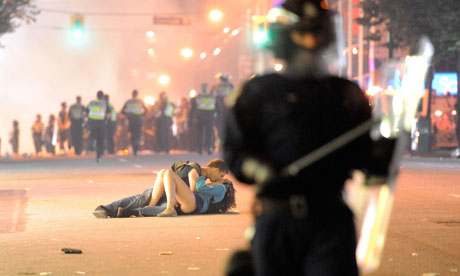 
An Interesting article from the Guardian Newspaper:

Vancouver, "the world's most livable city", has been devastated. Not so much by the riotous violence that came soon after the Canucks lost the Stanley Cup, but by what the international media's coverage of the carnage may mean for the city's image.

City hall, the province of British Columbia, and indeed the federal government of Canada, are worried that potential tourists will no longer think of Vancouver as a city of yoga pants, sushi and skiing, but of mayhem and fire.

Despite all the sorrow and disgust expressed by Vancouverites over the PR fallout, one image, absent of violence or destruction, has come to define the riot.

We see a young couple laid out on the street, embraced in a kiss, juxtaposed between a blurry riot cop running towards the camera and a line of police charging a crowd in the background.

Once the photograph hit the internet, it became a viral phenomenon in minutes. Already the uncontested frontrunner for the photo of the year, it's being compared to other historical kisses like Robert Doisneau's 'The Kiss' and Alfred Eisenstadt's picture of a kissing couple in Times Square on VJ day.

At first glance, the photo seemed too good to be documentary fact. For many internet flâneurs, myself included, it was too romantic and poignant to be of this world. The breathless idealism of the lover's embrace was in such stark contrast to the mindless rampage occurring around them that the internet's cynical instincts kicked in.

How could such authenticity exist in Vancouver, a city of glass that has spent the last 20 years standing in as a discount soundstage for New York and Los Angeles. You'll find no romance in these streets, unless it's a bit of marketing-related artifice.

Shortly before going to bed in the very wee hours on Thursday morning, my suspicions seemed to be confirmed when I came across an alternate angle of the couple's moment, shot on a camera phone from above, that surely proved the kiss was either contrived or worse.

I immediately posted it on my Tumblr blog and woke up eight hours later to discover that I had unwittingly broken the story that the photograph was indeed not what it seemed. Thousands debated, some kept the faith, others declared that they didn't care if was real or not, and a few claimed they had lost all faith in humanity. A mystery was born. Was it real or not?

Over the following hours the story evolved.

An Australian woman contacted the media with what is apparently the inside scoop. Yes, the couple had been knocked to the ground, but they were fine – the photo taken at the very second the boyfriend gave his girlfriend a reassuring kiss amid the chaos.

When we look at the riot photos, images that are said to have permanently soiled Vancouver's reputation, we see young men acting out for the camera, revelling in the worst kind of apolitical theatre. Through the haze of this absurd and dispiriting pantomime, Richard Lam has captured an image of the rarest form. One that is as authentic as it is romantic and speaks to a present cultural context but also contains a certain timeless virtue.

What differentiates this riot from the countless other sports riots of the last decade is that Vancouver is pathologically self-aware. Its economy is dependent on the city's ability to portray itself as a quasi-utopia, and its citizens and politicians are obsessed with achieving the nebulous status of "world class".

The irony here is that Vancouver has at last produced an iconic image that rivals those of Paris and New York, but it needed to shatter its own fantasy to do so.