A PULITZER-PRIZE PHOTO THAT ALMOST WASN'T: THE STORY OF "THE SOILING OF OLD GLORY" 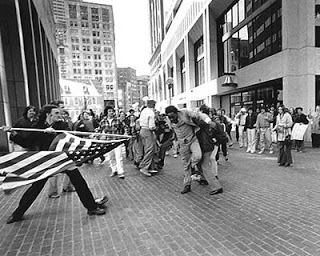 April 5, 1976, was during the second year of forced busing in Boston. It was a Monday and I reported to work for my 9-5 shift early, as usual, and when I arrived in the City Room I asked city editor Al Salie what was doing. He said there was an anti-busing demonstration at City Hall and Gino (Gene Dixon) was covering it. Although it was the second year of busing it was not unusual for the some of the students to walk out of school and hold a demonstration, and it was April and the weather was getting warmer.

I asked if I could go to it and he said yes. I actually did an errand before I got there and parked on the traffic island on Cambridge Street, which is in front of Boston City Hall. In those days I used to drive with my dog Glossy as my passenger, and she got to go to a lot of news stories.

As I walked into City Hall the group of demonstrators was just coming down the steps from the City Hall Council Chambers where City Councilor Louise Day Hicks, an anti-busing proponent, had invited them in for a salute to the flag (along with cookies with milk).

As they spilled out onto the Plaza a few of the demonstrators confronted a group of students from another school in Boston who were their way into City Hall for a tour. Many of those students were black, and some pushing and shoving began.

The Herald American was the first newspaper in Boston to get motor drives and the whole staff got one Nikon F camera body with a motor drive and four lenses: 20mm, 35mm, 135mm, and 200mm. And I bought myself a second Nikon F camera. We had a community lens locker in the office for longer telephotos. That day I was carrying the two Nikon Fâ€™s, but I only had the one motor drive for both. They were interchangeable, but I always tried to keep it so that I used a specific camera with the motor drive. I had a 135mm lens on the camera with the motor drive, and a 35mm lens on the other.

As the first scuffle began I switched my 135mm lens to a 20mm lens. I always carried 3 lenses in those days. I started taking photographs and looked over my right shoulder and could see this black man (lawyer Ted Landsmark) walking and he was making the turn onto the Plaza from State and Washington Streets. A bell went off in my head and I thought they were going to get him.

It first looked like the gauntlet from the movie with Clint Eastwood, everyone taking a shot whether it be verbal or throwing stuff, papers, apple cores, whatever they had in their hands, and then a couple of them moved in and started getting physical.

I started taking photographs with the motor drive camera with the 20mm lens on it. I could hear the motor working, but I could also hear the sound of it not transporting the film correctly. Donâ€™t ask me what that sounds like, but I knew what it was. I stopped shooting continuous shots and just pressed the button to shoot just one frame at a time.

Eventually I switched to the camera with the 35mm lens and got off one more shot, which is not on the contact sheet. The victim [Landsmark] was transported to the Mass General Hospital and the demonstrators continued on their way to Post Office Square outside the Federal Court House.

When I got there Joe Driscoll, a reporter from the paper, said to me, â€œDid you hear what happened at City Hall?â€ I told him yes, that I had shots of it. He told me to get right into the office as they were all excited about what had happened. To tell you the truth I did not grasp the magnitude of the incident till later in the day.

The Associated Press had transmitted a photograph of the incident but their photographer was not in as good position as I was, and the Globe photographer had the same problem. I had the best shot or shots. I had also arrived later, and the demonstrators came towards me, while the others who had been there earlier were either behind the group or in the middle.

When I got back to the office I developed the film (I think with the Kodak Versamat machine) and everyone thought I was nuts, because sometimes the machine made spaghetti out of the film. But this time it developed just the way it should.

We all noticed the images that ran together because of the motor drive not transporting the film properly, but there were enough images to put a picture story together. The editors were very frightened of the main image. It was a volatile situation, and it was about busing, and it was Boston.

I think the thing that saved them was that Howard Hughes died that day, and they could put something else at the top of the page. I think that appeased them enough that they no longer had the fear of showcasing on the top of page one the racism that rang out that day. 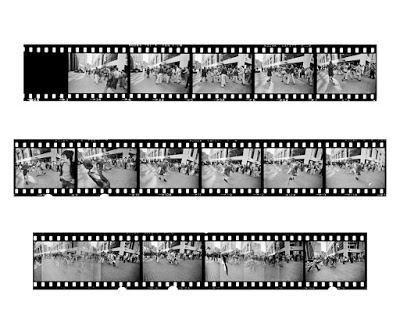 When he was working as a still photographer in Boston, Forman won three Pulitzer Prizes for photography in just four years (1976, 1977, and 1979). Then in 1983 he made the big switch, and heâ€™s been a television photojournalist for Bostonâ€™s WCVB-TV ever since. A book detailing the story behind Formanâ€™s second Pulitzer (above) came out in 2008, The Soiling Of Old Glory by Louis P. Masur.
‹ PREVIOUS   |   NEXT ›