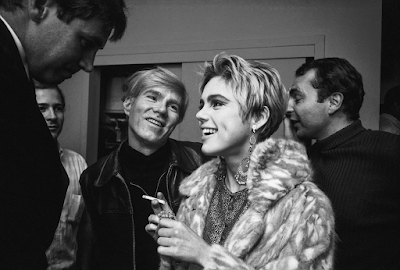 Warhol at a New York party with Edie Sedgwick, 1965. "In the years that I photographed Andy, I never saw him out of his 'character' — except in this one photo," Schapiro writes in the book. "He looks so charmed by his friend Edie. I find this picture to be very endearing. I call this image Andy Loves Edie."

By 1965, Andy Warhol had already revolutionized the art world with his depictions of soup cans, Marilyn Monroe, and Brillo boxes. His interests grew to include rock & roll — he started managing the Velvet Underground and eventually produced their debut, The Velvet Underground & Nico — and he began making even more films, which starred members of his retinue including Edie Sedgwick, Gerard Malanga, and Mary Woronov, among others. Seeing how he fascinated the world, Life magazine hired photojournalist Steve Schapiro to document Warhol's cultural ascension. Ultimately, the magazine never published the story.

Schapiro, who died earlier this year after a long and distinguished career which also included many well-known images from the Civil Rights Movement, excavated the negatives from his Life shoot for a book that's just been released. Andy Warhol and Friends: 1965 - 1966 includes many never-before-seen documents of a pivotal time in Warhol's life as he helped shape popular culture for decades to come. Included are scenes from the artist's Silver Clouds exhibition in L.A. and many shots of the Velvet Underground at work, as well as an essay and captions by Warhol biographer Blake Gopnik. What follows are some of Schapiro's eye-opening images from Andy Warhol and Friends.