“Anything was fodder for the camera with Bill Eppridge” 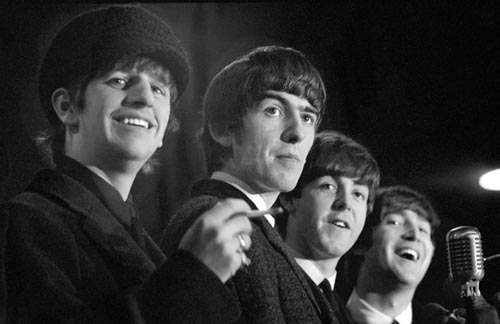 Ken Dixon: Gazing at history through a long lens
The Connecticut Post
February 13, 2016


Lets all get up and dance to a song that was a hit before your mother was born â€¦â€
John Lennon, Paul McCartney

This column is about â€œThe Beatles - 6 Days That Changed the World February 1964,â€ photographic evidence of the late Bill Eppridgeâ€™s crazy, fun week with the Fab Four and their fans in New York and Washington, with a couple of wacky train rides to boot.

But itâ€™s also about music, memory, history and the role of photography, the scientific process that someone with an eye, interpersonal skills and degrees of luck can use to make artful journalism.

Dozens of photos from the 90 rolls of film Eppridge shot that week are beautifully hung on the walls in the Art Gallery in the Visual & Performing Arts Center at Western Connecticut State Universityâ€™s Westside Campus. The hours are Monday through Thursday, noon to 4 p.m. and weekends from 1 to 4 p.m. Itâ€™s a tour de force that runs through March 13. Heâ€™s represented by the Monroe Gallery of Photography in Santa Fe.

Grandmothers will remember being teens and tweens. Forty-somethings may contemplate the changes the Beatles wrought to music and culture. And millennials can discover a simple slice of 20th Century social phenomena without the chore of too much reading.

My favorite photo was captured outside The Plaza Hotel in New York. An amused black-clad chauffeur is trying to unload The Beatlesâ€™ baggage in a scrum of girls. One kid, with a huge smile, is hugging a guitar case as if it were Paul McCartney himself. If she was 14 then, sheâ€™s 66 now. Every time I look at the image it makes me laugh out loud.

Eppridge, a famous photographer for Life magazine and Sports Illustrated, died in Danbury about 2 1/2 years ago at 74. When President John F. Kennedy was murdered in November of 1963, Eppridge was with mountaineers in the Alps. He came off Mont Blanc, the tallest in Europe, where a local priest told him of the assassination. In just a few years, as the sassy â€™60s unwound in violence and cynicism, he would get extremely close to another Kennedy murder.

On the morning the Beatles landed, Feb. 7, Eppridge got the assignment to meet them at the newly renamed JFK International Airport.

A welcome relief after the presidentâ€™s murder less than three months earlier, the lads from Liverpool were met by thousands of teenagers. Eppridge called his editor and said he wanted to stay with the band for a few days.

â€œI liked these guys immediately,â€ Eppridge recalled in the 2013 book of photos about the week, published by Rizzoli. â€œShortly after, Ringo Starr turned to me and said, â€˜All right, Mr. Life Magazine, what can we do for you?â€™ â€˜Nothing,â€™ I said, â€˜not one single thing. Just be you and Iâ€™ll turn invisible. I wonâ€™t ask you to do a thing.â€™â€

In the winter of 1964, the United States needed The Beatles and their pop harmonies. On Sunday night, Feb. 9, they took â€œThe Ed Sullivan Showâ€ by storm.

Monday, Feb. 10, was a nasty, cold rainy day in Stamford. It was so horrible that the runny-nosed masses at Belltown School â€” usually confined to the playground in all weather until school started â€” were allowed inside, to line up on a stairwell, dripping wet, to await the 9 oâ€™clock bell. All the fourth-grade chatter was about The Beatles appearance the night before and who might be a kidâ€™s favorite.

Alas, we were a â€œDisneyâ€ family on Sunday nights, watching wholesome entertainment on another TV network, rather than the usual cavalcade of nightclub comics and crooners that Sullivan trotted out every week for CBS.

I knew nothing about the Beatles, was drastically behind the pop curve and never really caught up. Maybe thatâ€™s why Iâ€™m a contrarian newspaper reporter.

Of course, I eventually found the Beatles and their poppy tunes and startling harmonies. You can easily catch their Ed Sullivan appearances on the Internet. Those first 13 minutes, with â€œAll My Loving.â€ â€œTill There was You,â€ â€œShe Loves You,â€ â€œI Saw Her Standing Thereâ€ and â€œI Want to Hold Your Handâ€ say almost all you need to know about the innocent, early â€™60s.

â€œAnything was fodder for the camera with Bill,â€ recalled Adrienne Aurichio, Eppridgeâ€™s wife and collaborator, who held a gallery talk the other night at WestConn. Among his 900 assignments were Dr. Jonas Salk, who defeated polio, actress Mia Farrow, President Lyndon Johnson, Woodstock, Barbra Streisand and Vietnam.

In a way, the Beatles were a welcome respite as the remainder of the â€™60s played out. By the fall of 1964, Eppridge was practically living with a couple of heroin addicts for Lifeâ€™s stark, harrowing, graphic â€œNeedle Parkâ€ report on drug users at 72nd Street and Broadway. Maybe in 50-plus years we havenâ€™t really evolved too much, as the latest heroin epidemic plays out.

Eppridge is most famous for the iconic image of Robert F. Kennedy dying on the floor of the Ambassador Hotel in Los Angeles, a bus boy by his side, after winning the California presidential primary in 1968. The murder occurred two months after the assassination of the Rev. Dr. Martin Luther King Jr. The â€™60s were surely over.

Ken Dixonâ€™s Capitol View appears Sundays in the Hearst Connecticut Newspapers. You may reach him in the Capitol at 860-549-4670 or at kdixon@ctpost.com. Find him at twitter.com/KenDixonCT. His Facebook address is kendixonct.hearst. Dixonâ€™s Connecticut Blog-o-rama can be seen at blog.ctnews.com/dixon/