Pfc. Tony Vaccaro played two roles during WWII: combat infantryman and unofficial photographer. At great personal risk, he shot and developed 8,000 photographs from the front lines that showed the camaraderie, the bravery and the tragedy of war – in a way no one had done before. Directed by Max Lewkowicz. An HBO Film. 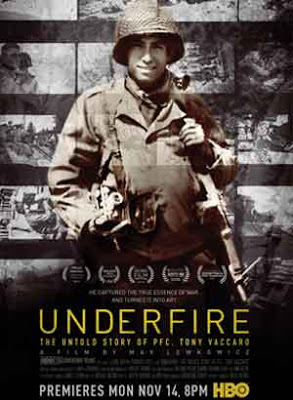 Directed by Max Lewkowicz (the New York Emmy-winning Morgenthau), UNDERFIRE: The Untold Story of PFC. Tony Vaccaro is the remarkable story of WWII infantryman and photographer Tony Vaccaro, who created one of the most comprehensive, haunting and intimate photographic records of combat.

Through interviews with Pulitzer Prize-winning photographers and Vaccaro himself, this moving film examines issues raised by witnessing and recording conflict, following him as he retraces his journey across Europe as a soldier, sharing the stories behind some of his most powerful pictures along the way.

Engrossing, unexpectedly moving..." -Kenneth Turan, Los Angeles Times
"Tony Vaccaro's life was forged by pain and courage. Passion saved his life and enriched ours." - Tim Van Patten, director Game of Thrones, The Sopranos
"No one got closer than an infantryman in war, and no one got closer than Tony." -Alex Kershaw, Historian and New York Times best-selling author, "The Liberator"
Monroe Gallery of Photography is pleased to represent the fine art photography of Tony Vaccaro. "Tony Vaccaro at 95" will be on view in the gallery November 24 - January 21, 2018.