An American Girl In Italy - by David Schonauer 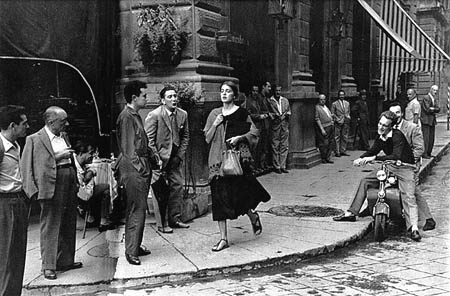 The 60th anniverary of the making of a truly iconic photograph was recently celebrated, resulting in numerous news articles and an appearance by the subject of the photograph on the TODAY Show. David Schonauer has written on a variety of topics for Atlantic Monthly, the New York Times, Worth, Mademoiselle, Outside, and other publications. He is the former editor in chief of American Photo magazine, and here is his take.

Via The Big Picture
A Journal of the Visual Culture from David Schonauer
Photographer Ruth Orkin’s “American Girl in Italy” is probably one of the most widely known and loved images from the 20th century. Orkin, who died in 1985, took the picture a little more than 50 years ago, on August 21, 1951, in the Piazza della Repubblica in Florence, a day after meeting a 23-year-old American woman who was traveling through Europe alone. Her name was Ninalee Allen, known to her friends by a childhood nickname, “Jinx.” A recent graduate of Sarah Lawrence College, she was spending the summer on a great adventure. Her carefree spirit—as well as her beauty and commanding six-foot height, caught Orkin’s attention. She thought she might take a color picture of Allen near the Arno River, which she could sell to a newspaper for a few dollars. And so the stage was set for a remarkable moment and a remarkable photograph.

The picture has beguiled and confounded the world since it was printed as a poster in the 1970s. It has been seen as a symbol of female powerlessness in a male-dominated world, which is not what Orkin intended. It also has been the subject of debate because Orkin in fact shot it twice—after recording the reaction of the men in the Piazza when Allen walked through, she asked the young woman to walk through again. It was the second entrance that became the famous photo. Did she play too fast and loose with the truth? Does it matter?

I recently wrote about the photograph for the October issue of Smithsonian magazine. (Go here to read my piece.) As part of my research, I went to the best primary source I could find—the American Girl herself. Ninalee Allen is now Ninalee Craig, age 83 and living in Toronto. She is lively, lovely, and very certain that Orkin’s picture reflects the truth of what happened that day. Here is a excerpt of my interview with her.