Annie Leibovitz: Places instead of faces 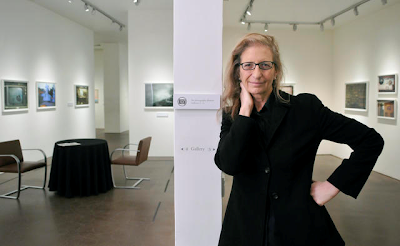 By Kathaleen Roberts
The Albuquerque Journal

And, of course, John curled around Yoko in fetal submission.

The images of Annie Leibovitz sear the mind like cultural tattoos

But after 44 years of shooting Mick and Keith, the Blues Brothers and a bleeding Pete Townshend, Leibovitz has focused her lens on her own personal “Pilgrimage.” More centered on place and the shadows of their former occupants, these are not the carefully staged and lit portraits associated with the photographer’s rock ‘n’ roll glory years.

There are no people here.

“Annie Leibovitz: Pilgrimage” opens Friday at the Georgia O’Keeffe Museum in Santa Fe. Leibovitz’s lens leads viewers from O’Keeffe’s Abiquiu home to Elvis’ gun-shot TV set, to Thoreau’s Walden Pond and Virginia Woolf’s writing desk. Arranged as a kind of travelogue, the show includes 57 images taken from the south of England to the Yosemite Valley. In the past, she had always worked fettered by assignments.

For perhaps the first time, she photographed images only when she felt their seduction.

“When you’re a photographer, you don’t stop seeing,” she said. “Stuff gets a hell of a lot more interesting, and you’re better than ever at what you do. It’s reflected in this work.

“You don’t know if you had it in you anymore to just take a picture,” the 63-year-old continued. “I learned that it’s a deep well.”

Oddly, Leibovitz is careful not to call the exhibition photographs. “It’s not beautiful photographs,” she insisted. “It’s note-taking.”

The images span the rhythms of dramatic landscapes (Niagra Falls, Old Faithful), as well as dimly lit interiors –– as the objects and talismans of past lives.

The series germinated from a set of serendipitous encounters that led Leibovitz from accepting the Centenary Medal of the Royal Photographic Society to traveling to Monk’s House, the home of Vanessa Bell, Woolf’s sister, where Leibovitz entered the author’s writing studio to discover both the author’s battered desk and glasses.

From there, she traveled to London, where she photographed Sigmund Freud’s ornate couch after finding it stuffed in a closet. She learned it had been his deathbed, as World War II air-raid alarms roared throughout the neighborhood.

“I was hooked,” she said. “I felt myself totally seduced into the imagery.

“I love the series,” she continued. “I usually don’t think in terms of a single image. One image complements the other like a brother or a sister.”

Stateside, she attended the bar mitzvah of her cousin’s son in Amherst, Mass. Her sister suggested they visit Emily Dickinson’s house, as well as Emily’s brother Austin’s house next door.

“It was getting dark,” Leibovitz said. “It was after five. (Austin’s) house hadn’t been touched at all. It had been left in a Victorian state.”

Armed with a digital camera, Leibovitz was amazed by the clarity with which it captured the dimly lit corners.

She shot Emily’s herbarium of plant specimens, as well as her eyelet-strewn white dress, stored behind Plexiglas. Dickinson had been the favorite poet of Leibovitz’s late partner Susan Sontag, who died in 2004.

From there, Leibovitz came up with an initial list of 12 places. It would eventually swell to encompass 27.

A visit to the Lincoln Memorial turned into a search for the former president that led her through Kentucky, Indiana and finally to Illinois.

“I didn’t know why it moved me to tears,” she said of the Washington, D.C., landmark. But then she realized Lincoln’s shadow traced a through line from Marian Anderson to Eleanor Roosevelt to Martin Luther King Jr.

Roosevelt had invited Anderson to the White House to sing after she was banned from Constitution Hall.

“You’re standing there with your children,” Leibovitz said. “You go on the journeys in your mind. I went looking for Lincoln’s log cabin. I started in Kentucky and ended up at Springfield (Ill.). This was all before Spielberg and the ‘Lincoln’ movie.”

She shot the top hat and bloodstained gloves Lincoln wore to Ford’s Theatre, as well as a first draft of the Gettysburg Address.

Georgia O’Keeffe would become a kind of touchstone. Leibovitz originally discovered the artist through the famous portraits taken of her by her husband, Alfred Stieglitz.

“Stieglitz’s portraits of O’Keeffe are probably the greatest portraits ever done,” she said. “They are just unparalleled. Sometimes I use them during portrait photography workshops.”

Most magazine assignments give the photographer just 15 minutes to work, she added.

“It can’t even begin to compare to what Stieglitz and O’Keeffe did together. When you have the opportunity to make her look into those lenses –– I can’t even talk about it without moving close to tears. We think we knew all about her, but we didn’t.”

When museum staff members escorted Leibovitz to O’Keeffe’s famous Black Place, she couldn’t take her eyes off the rock-scattered ground. Suddenly, she understood why the artist was always photographed bent over and staring at the soil –– she was looking for rocks.
“She was collecting the rocks like seashells,” Leibovitz said.

The photographer was equally mesmerized by a divided drawer in the Georgia O’Keeffe Research Center containing the artist’s pastels, which she had made herself.

“I don’t have the words for it,” Leibovitz said, “… seeing the blue of the sky, the red of the hills, it’s all your landscape here. You feel her fingers on her pastels.”

She found herself quietly weeping over the torn bedsheets in O’Keeffe’s bedroom.

“The bed linens on her bed were threadbare,” she explained. “So she was very frugal. You’re a little bit like a detective. …

“O’Keeffe to me is really the heart of this project. You think you understand someone, and you don’t.”

Leibovitz’s career took off when she was hired by Rolling Stone magazine at the age of 18. She was still a student at the San Francisco Art Institute, where the emphasis was on the work of Robert Frank and Henri Cartier-Bresson. Rolling Stone editor Jann Wenner named her the magazine’s photo chief in 1973, a job she held for 10 years. She was just 24 when she worked as the Rolling Stones’ tour photographer in 1975. Her intimate photographs of rock royalty helped define the magazine’s look. She joined the revived Vanity Fair in 1983.

Leibovitz has long said the Rolling Stones tour was the genesis of her own drug addiction, from which she later recovered.

“My Rolling Stone years were when I was a kid,” she explained. “The fact that I’m still alive –– I’m happy about that. I wasn’t one of those people who want to take pictures of the band on stage. We were all young. No one told you what to do. I was supposed to be taking publicity pictures. That never happened. I didn’t know how the music was made. I never looked at the pictures until much later. It was like a war zone. I learned a lot about power and fame and the pitfalls. It was a quick study in living too fast.”

Leibovitz’s next book will be about artists working in their studios. She can’t think of any celebrities she would want to shoot today.

“I look back, and I wish I could have gotten to Martha Graham,” she said. “I tried for Lucien Freud, but it just didn’t work out.”

But she is not averse to capturing the pop stars of today — even Justin Bieber.

“I’m not against Justin Bieber,” she said. “On the basis of social reporting, I don’t find it uninteresting.”