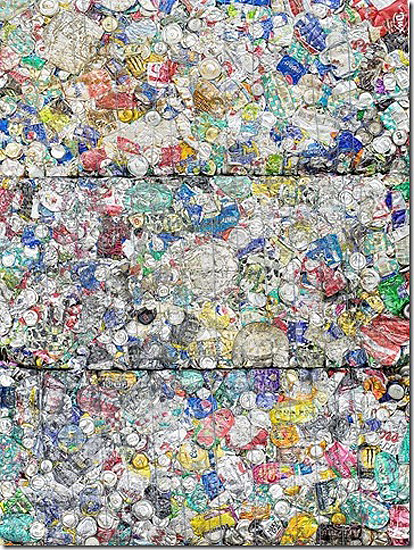 Recycled Aluminum Can Study #1
Santa Fe--Monroe Gallery of Photography, 112 Don Gaspar, is pleased to present "Remnants", an exhibition of large-scale color photographs of the environment and the environmental remnants left behind either by nature or man.
The exhibitionopens with a public reception with photographer Stephen Wilkes from 5 - 7 PM on Friday, October 2. The exhibition continues through November 22.
For more than two decades Stephen Wilkes has been widely recognized for his fine art, editorial, and commercial photography. With numerous awards and honors, as well as five major exhibitions in the last five years, Wilkes has made an impression on the world of photography.
In the face of increasing global attention on climate change and rebuilding; and as society grapples with the byproducts of global human achievements such as urban development and mass production that have caused problems of scarcity and waste simultaneously, "Remnants" is a timely examination of the environmental issues facing society.
"I’ve often found that there is great power in telling difficult stories in a beautiful way. Interest in any given story wanes so quickly, yet it’s only through taking the time to go deeper that we get to a place of real understanding.
There are moments in journalism when the media captures the visual details of a disaster, yet sometimes misses the true scale of devastation. It’s my hope that these images serve as a wakeup call — whether that call is about global warming, infrastructure, or just the recognition that the world is changing, it’s a reminder that we need to take special care of our fragile world." --Stephen Wilkes
Photography has been Stephen’s passion since age 12, when his fascination with science led him to take photographs through a microscope. He began working on his own at age 15, attended Syracuse University’s Newhouse School of Communications, graduating in 1980. In 1982, Wilkes opened his own studio in Manhattan.
“Ever since I took my first pictures, photography has always been the joy of discovery for me,” says Wilkes. “The excitement not only lies with what I see and how I see it, but mostly when someone looks at the finished photograph and feels the same emotions I felt when I took the picture. There is something sacred about the right moment. The frame where all the energy comes together and, in one instant, a story is told.”
Wilkes' photographs are in the permanent collection of The Library of Congress, Washington, D.C.; George Eastman House, Rochester, New York; Museum of Fine Arts, Houston; Dow Jones & Company, New York City; The Jewish Museum, New York City; and in numerous important private collections throughout the world. His work has graced the covers of numerous international publications, including Sports Illustrated, Fortune, Vanity Fair, The New York Times Magazine, Life Magazine, and Time Magazine. Selected photographs in the "Remnants" exhibition were featured in the Annenberg Center for Photography exhibit "Sink or Swim: Designing For A Sea Change", Dec 13, 2014 - May 3, 2015.