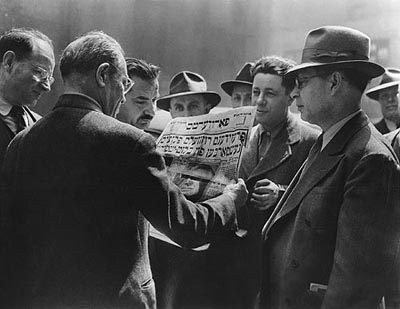 Ida Wyman: ﻿Men of the Garment District Read of President Roosevelt's Death, NYC, 1945
On the afternoon of April 12, 1945, President Franklin D. Roosevelt said, "I have a terrific pain in the back of my head." He then slumped forward in his chair, unconscious, and was carried into his bedroom. The president's attending cardiologist, Dr. Howard Bruenn, diagnosed a massive  cerebral hemmorrhage. At 3:35 pm that day, Roosevelt died.

Ed Clark: Navy CPO Graham Jackson Playing "Going Home" as President Roosevelt's Body is Carried, Warm Springs, GA, April 13, 1945
On the morning of April 13, Roosevelt's body was placed in a flag-draped coffin and loaded onto the presidential train. After a White House funeral on April 14, Roosevelt was transported back to Hyde Park by train, guarded by four servicemen from the Army, Navy, Marines, and Coast Guard. Roosevelt was buried in the Rose Garden of the Sprinwood Estate, the Roosevelt family home in Hyde Park on April 15.

Roosevelt's death was met with shock and grief across the U.S. and around the world. His declining health had not been known to the general public. Roosevelt had been president for more than 12 years, longer than any other person, and had led the country through some of its greatest crises to the impending defeat of Nazi Germany and to within sight of the defeat of Japan as well.


Less than a month after his death, on May 8, came the moment Roosevelt fought for: V-E Day.

An editorial by The New York Times declared, "Men will thank God on their knees a hundred years from now that Franklin D. Roosevelt was in the White House."