ART OF SOUND EXHIBIT REVIEW IN THE SANTA FE REPORTER

The Sound of Silence 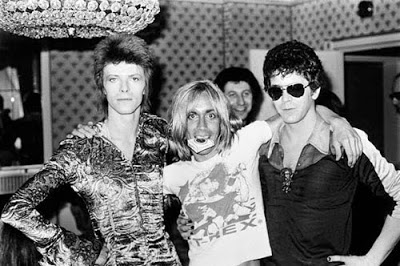 As I stood in front of a 1972 photograph of David Bowie, Iggy Pop and Lou Reed arm-in-arm, I wondered if I was able to accurately assess the image. Had the photographer captured something special with brilliant timing and just the right amount of coaxing? Or was I drawn to Bowie’s piercing eyes, Reed’s impossible hipness and Mr. Pop’s bared teeth clutching a pack of Lucky Strikes?


In other words, was this an iconic image or just an image of icons?

If one wanted to criticize Monroe Gallery’s The Art of Sound, it might be on the grounds that some of the pictures are noteworthy only for whom they depict—fame by association. Nevertheless, as a lover of photography and classic rock, I had a blast.

Celebrity portraiture is a tricky proposition. To be totally effective, it often requires that the viewer have a priori knowledge of its subject. But this is exactly why the show is so fun. Done well, the photographs themselves become inseparable from the celebrities within them; the photographs become part of celebrities’ images, freezing something about them that stands in for the truth. Whether the photographs help create the vibe or just a record of it, they bring to mind sounds and stories of their subjects.

One close-up shows Louis Armstrong’s fingers as he smears balm across his ample, voluminous lips. Immediately I could imagine the bright, clear attack of his powerful horn. Another standout is a grid of images that show Jimi Hendrix performing live. Each shot is composed the same, from the waist up, but Hendrix’s guitar face moves from the meditative to the orgasmic, and it is impossible not to hear the virtuosic roar and flutter of his incomparable solos.

The exhibit teeter-totters between documentary and formal portraiture, and there are masterpieces of both. “Hullabaloo with Chuck Berry, New York” shows the bizarre set of the televised music program, replete with go-go dancers, men in matching referee jerseys and a seated audience in heavy horn-rimmed glasses. Squished into the lower left corner, Berry is hardly in the picture at all.

A portrait of Igor Stravinsky is obviously posed, much quieter, but no less stunning. The photographer, Arnold Newman, also placed his subject in the lower left. The remainder of the composition is filled with the stark geometry of a lifted piano lid. From across the room, the image resembles a black-on-white modernist painting more than a photograph.

Some of the images border on the absurd, as in the one of Mick Jagger as he sashays past the camera in a top hat and spandex. Then there’s the deeply silly Jim Morrison posed in front of a lava-lamp-like backdrop, his wild eyes and wild mane outdone only by his wild snakeskin suit. (No wonder he called himself the Lizard King…)

Another enjoyable aspect is the apparent duality of the photographer and the camera. The images may seem reverential or composed in a flattering way, but the camera is still a faithful, if dispassionate, surveillance tool, catching the details that nowadays would be airbrushed into oblivion. I was surprised to note Elvis’ blackheads or the stubbly underarms of The Supremes. But this only reinforces the sense of immediacy, the proof that these are real people—a fact remarked upon with disgust and bewilderment by present-day tabloids that show stars without make-up or with embarrassing beach bodies.

On my way out, I complimented the gallerist. He said, “There’s something for everyone.”

I don’t think that’s quite right. There’s actually a pretty narrow focus to the work, which is primarily from the ’50s, ’60s and ’70s. But if you like that era, The Art of Sound does a great job of touching on some of the biggest acts in music before video killed the photography star.


The exhibition continues through April 11.