Article in the current The New Yorker on Eddie Adams 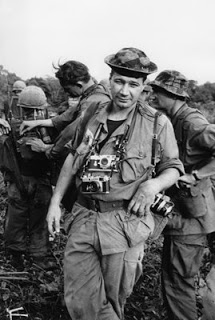 The other night, a group of hard-core journalist types gathered at the Umbrage gallery, in DUMBO, for an exhibition of black-and-white photographs by the late Eddie Adams. The centerpiece was Adamsâ€™s 1968 Pulitzer Prizewinning photograph, taken for the Associated Press, of Nguyen Ngoc Loan, the police chief of South Vietnam, firing a bullet into the head of a Vietcong suspect. The exhibit, which coincides with the release of â€œEddie Adams: Vietnam,â€ a book put together by Adamsâ€™s widow, Alyssa, features much work that has never been seen, printed from a cache of negatives that Adamsâ€™s first wife, Ann, discovered inside some plastic garbage bags in her garage. (A documentary about Adams, â€œAn Unlikely Weapon,â€ comes out in New York in April.) Hal Buell, a former A.P. editor who knew Adams â€œfor a hundred years,â€ and who wrote the text for the book, said it seemed fitting that the photographerâ€™s work had been misplaced: â€œThatâ€™s a disease of daily picture journalism. Weâ€™re so busy doing today that sometimes history gets shunted aside and ends up in a bag somewhere.â€
More of Adamsâ€™s old friends showed upâ€”the Pulitzer laureates John Filo, who took the 1970 Kent State photograph, and Nick Ut, who took the 1972 picture of a naked Vietnamese girl covered in napalm (Kim Phuc, whom Ut took to the hospital before he delivered his film, and with whom he has since become friends). Ut, who is Vietnamese, met Adams through his brother, Huynh Thanh My, also a photographer, who was killed in 1965, while covering a battle between the Vietcong and the SVN Rangers for the A.P. â€œAfter my brother was killed, Eddie always worried about me,â€ Ut said. â€œHe took care of me very well.â€ Pete Hamill, who was sent to Vietnam by the Post, met Adams in 1965. â€œWe would hang out at the Caravelle Hotel bar, up on the roofâ€”beautiful views of Saigon,â€ Hamill said. â€œAnd at the A.P. bureauâ€”in those days you would hope to convince some pilot to mail your story for you, or you would file by cable at the bureau.â€ He talked about Adamsâ€™s politics: â€œEddie wasnâ€™t partisan. He had been a marine. When he finally left Vietnam, he worked for Parade, doing portraits. He didnâ€™t want to cover any more wars, understandably. He wanted to be taken seriously as someone other than the person who had taken the photograph of the execution of a Vietcong suspect. But he knew he couldnâ€™t get away with it.â€
Hamill said he doubted that there could be a contemporary equivalent to Adamsâ€™s execution picture. â€œThe most famous photos out of Iraq are Abu Ghraib, and those are by amateurs,â€ he said. â€œIn Vietnam there was an amazing amount of freedom given to the press. Some soldiers would be going out and youâ€™d say, â€˜You got room?â€™ With Iraq and Afghanistan thereâ€™s no way to get out thereâ€”thereâ€™s nothing. Theyâ€™re fortresses.â€

Chris Hondros, a photographer for Getty Images, had just returned from his thirteenth trip to Iraq. He pointed to a picture of Adams, wearing a set of sixties-era military fatigues, with a Leica and a Nikon strung around his neck. â€œNone of us in Iraq would in a million years be caught wearing a uniform like this now,â€ Hondros said. â€œIt ties into the larger issues of separation between the media and the military, which stems from the Vietnam era.â€ Of Adamsâ€™s execution picture, he said, â€œThat picture is almost a template of what a photographer tries to do in Iraq. At least so far, a truly iconic picture like that has not emerged.â€ He took one photograph, he said, that reminds people of Adams. â€œItâ€™s a picture of a little girl. It was after a checkpoint shooting with U.S. soldiers. They shot up a car coming toward them, and it turned out it was just an Iraqi family. They killed the parents, who were in the front seat, and the children in the back survived.â€ Hondrosâ€™s picture shows the girl, one of the survivors, crouching at the feet of an American soldier and holding out her hands, which are covered with blood. â€œIt ran all over the world,â€ he said. â€œI got a lot of e-mailsâ€”â€˜This picture is going to stop the war, just like Eddie Adamsâ€™s picture.â€™ This was in January, 2005. And that didnâ€™t happen.â€ â™¦
‹ PREVIOUS   |   NEXT ›