As a selection of presidential campaign photographs go on show in the US, curators Sid and Michelle Monroe offer an insight into the making of these images 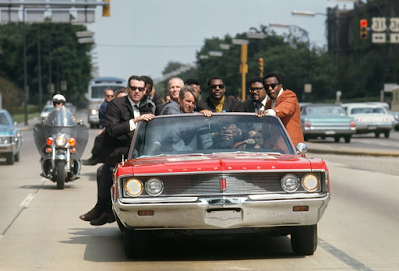 Since its invention almost two centuries ago, photography has become both art and artifact, artifice and evidence, documenting the world in which we live. Granted access to the most exclusive of spaces, photojournalists play an extraordinary role in writing a first draft of history, recording it even as it unfolds. In bearing witness to historic events, their images have the power to shape and shift public opinion without uttering a single word, and while some may strive to be objective, such a task is arguably impossible.

The media plays an integral role in US presidential elections, from what it chooses to cover to how it frames the stories it tells. The new exhibition, The Campaign, curated by gallerists Sid and Michelle Monroe, explores how images inform our perception of candidates running for the highest office in the world. Featuring work by Bill Eppridge, Irving Haberman, Cornell Capa, Bill Ray, John Loengard, Alfred Eisenstaedt, and Neil Leifer, among others, The Campaign illustrates how the photography has become an inextricable part of the political narrative over the past 75 years.

“What struck us when we were curating the show is that the themes of restoration of the country, corruption of my opponent, aspiration for the young, civil inequities, working people’s inequities, these keep recycling almost as if all of these issues are a part of the American personality,” says Monroe. “Each campaign seems to decide and direct which part they are going to amplify.” Here, the Monroes offer an insight into the making of five iconic images of the US presidential race.

“Bill Eppridge was a sweetheart. His career spanned everything from Vietnam, Civil Rights, and sports, but he as fate as would have it was the photographer who captured Robert Kennedy’s assassination [on 6 June 1968] so he was on the campaign from the beginning to the bitter end.

“This image was an outtake. It was never published. Bill brought it to us and he wasn’t even sure who everybody was in the picture so we had this wonderful time reconstructing it because he didn’t have notes. RFK made a point of campaigning in a convertible in every town and city he went into. He was warned and he said. ‘If they want to get me, they’re going to get me.’

“Bill said that at night Bobby would travel with members of his family, put them to bed in the hotel, then come down and seek out journalists who had been in Vietnam because he wanted to know everything about what they had seen and what they thought. Bill said he struggled because it became very difficult to be not emotional and not to get connected to this campaign.” 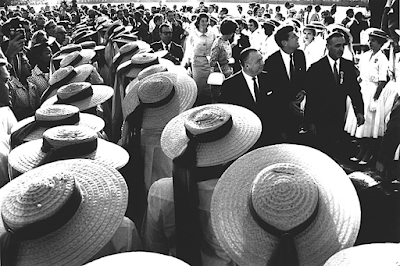 “Grey Villet was a South African photographer who came to America. He was very quiet. He wasn’t as swashbuckling as a lot of the Life photographers were but he was extremely versatile. When you think about the versatility required in covering a presidential campaign, a riot, a rocket liftoff to space – the profession doesn’t get enough credit for what it requires of what we consider artists.

“In this era, every single one of these photographers was largely self-taught. For that versatility, they didn’t study to be specialised so when it came to an assignment this is where the innovation, artistry, athleticism, creativity would come in. Grey made this wonderful image that captures the aura of the Kennedy Mystique.

“We have this image of Kennedy commanding the campaign but the reality was the 1960 Democratic National Convention was highly contested between Kennedy and Lyndon B Johnson.  The photograph shows Kennedy with his sisters in the background, other politicians with him, and women in these wonderful hats. He is bringing the full Kennedy Mystique into the convention to sway those delegates in a way that Johnson couldn’t. Johnson was much more gruff and brash and Kennedy was trying to put on a show.” 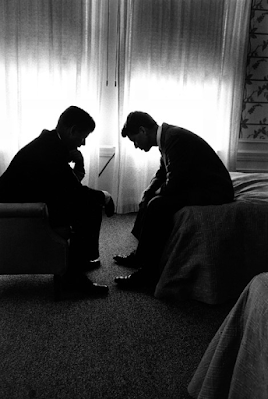 “In the 1960 presidential campaign, John F Kennedy’s platform was that we are now a ‘New America’. We’re a younger, more aspirational people and we’re going to have to come together. Nixon’s strategy was the Southern Strategy [which appealed to white supremacy to increase Republican turnout in the South, just as the Civil Rights Movement was reaching new heights and segregation was being dismantled]. Nixon wanted to divide and invoke the fear the racial equality will change our lives and traditions forever.

“This photograph was made just when Kennendy was telling his brother Robert that for strategic reasons he has agreed with his advisors to name [then Texas Senator] Lyndon B. Johnson as his running mate. Hank Walker, working for Life magazine, said he took one photograph in that room and left immediately afterwards because of the tension. He stepped outside and shut the door. When the discussion was over, moments later, RFK came out and slammed his fist into his open palm, over and over again, saying, ‘Shit! Shit! Shit!’” 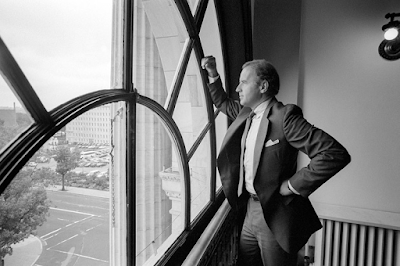 “Joe Biden was a Democratic candidate for President in 1987. One of the factors that ended his campaign was the discovery of a life-threatening aneurysm. He was out of commission for some time. The photograph was taken upon his return, just outside his Senate office. Biden came back as a hero who could speak to both sides of the aisle.

“Joe McNally, who is a very down to earth New Yorker, will tell you what’s what. He walked away saying, ‘This is the real deal. Biden is a genuine nice guy. I saw how he was received, but also just how he spent time with me. It’s a cliche but he’s a regular Joe.’” 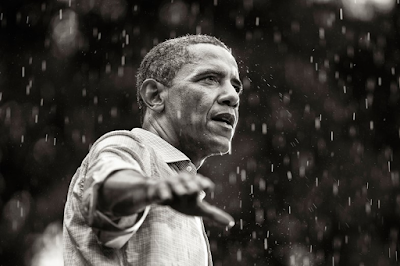 “Brooks Kraft covered both Obama presidential campaigns; he also covered the White House for Time magazine. What’s remarkable is that this rally was cut short because it rained torrentially. The circumstance speaks volumes about Obama as a candidate and as a President: that he went head first into the campaign. It’s a very heroic pose. It’s very rock and roll.

“We hear this over and over again from journalists: they’re cold, they’re wet, they’re hungry, they’re pushed around, they’re abused, they’re spit on. It’s really a missionary kind of dedication. We feel so devoted to these photographers. It’s so vital to our democracy to tell these stories – and to tell them unimpeded, which has been increasingly tampered with. As Orwell said, ‘Much of what is important for us to see and read we are not meant to know.’”

The Campaign is on view online and at Monroe Gallery in Santa Fe, New Mexico, through November 15, 2020.