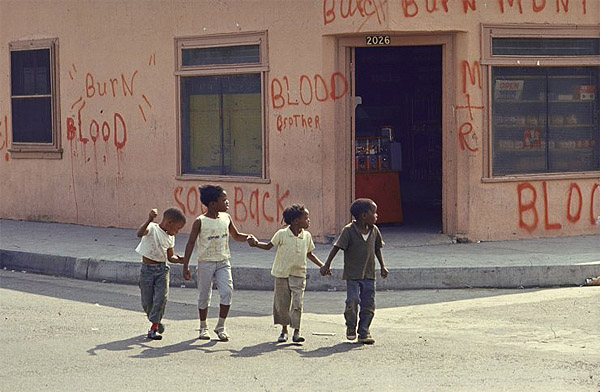 Caption from LIFE "Children in Watts grow up with the signs of fear, desperation and hatred all around. The words painted last August on this little grocery store, telling rioters that it is owned by a Negro and urging them to burn something else, were left on the walls for months afterwards -- just in case." Photography by Bill Ray.
The Watts Riot, which raged for six days and resulted in more than forty million dollars worth of property damage, was both the largest and costliest urban rebellion of the Civil Rights era. The riot spurred from an incident on August 11, 1965 when Marquette Frye, a young African American motorist, was pulled over and arrested by Lee W. Minikus, a white California Highway Patrolman, for suspicion of driving while intoxicated. As a crowd on onlookers gathered at the scene of Frye's arrest, strained tensions between police officers and the crowd erupted in a violent exchange. The outbreak of violence that followed Frye's arrest immediately touched off a large-scale riot centered in the commercial section of Watts, a deeply impoverished African American neighborhood in South Central Los Angeles. For several days, rioters overturned and burned automobiles and looted and damaged grocery stores, liquor stores, department stores, and pawnshops. Over the course of the six-day riot, over 14,000 California National Guard troops were mobilized in South Los Angeles and a curfew zone encompassing over forty-five miles was established in an attempt to restore public order. All told, the rioting claimed the lives of thirty-four people, resulted in more than one thousand reported injuries, and almost four thousand arrests before order was restored on August 17.

Throughout the crisis, public officials advanced the argument that the riot was the work outside agitators; however, an official investigation, prompted by Governor Pat Brown, found that the riot was a result of the Watts community's longstanding grievances and growing discontentment with high unemployment rates, substandard housing, and inadequate schools. Despite the reported findings of the gubernatorial commission, following the riot, city leaders and state officials failed to implement measures to improve the social and economic conditions of African Americans living in the Watts neighborhood. The Civil Rights Digital Library

Bill Ray's photographs from Watts are included in the exhibition "The Long Road: From Selma to Ferguson" through September 27, 2015.
A year after the Watts Riots in 1965, LIFE magazine revisited the neighborhood through a series of color pictures by photographer Bill Ray. (Via Time.com)