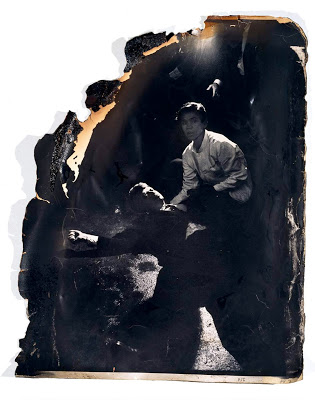 On the night of Senator Kennedy's assassination in Los Angeles, LIFE was closing that week's issue. Bill Eppridge’s negatives were processed in Los Angeles by J.R. Eyerman, and then flown to the Time Life lab in New York for printing. The printer was Carmine Ercolano, and he made only one master print for reproduction purposes. The negative was very thin, and the face of the busboy had to be airbrushed to bring out his features. The airbrushing is visible on the print, as are the pencil instructions along the bottom in the white border. This master print was later copied on a 4 x 5 camera, in the Time Life lab, and all future reproductions were made using a copy negative.

The master print was given to Bill Eppridge by Doris O'Neill, then the Director of the Time Life Picture Collection, shortly after LIFE magazine ceased weekly publication in 1972. Bill Eppridge was reluctant to display the print in his home in Laurel Canyon, and he placed it behind a sofa. Sometime later, a canyon fire destroyed his home. When Bill returned to the house to retrieve belongings, he found the print had burned around the edges, but had survived the fire.

"An artifact is a human-made object that gives information about the culture of its creator and its users, and reflects their social behaviors. An icon, from the Greek "image", is a representation that is used, particularly in modern culture, as a symbol representing something of greater significance.

"Several 20th-century photographs have attained icon status but few are considered artifacts. One example is Bill Eppridge's damaged photograph of Bobby Kennedy as he lay wounded in a kitchen passageway in Los Angeles.

"But how does one value such an object? What comparables are appropriate? Would it be possible to compare it with the film footage shot by Abraham Zupruder that captured President Kennedy's assassination in Dallas in 1963? That film was deposited with the National Archives in 1978 by the family for safekeepimg. In 1992 a Federal law required all records of the assassination be transferred to the National Archives, passing ownership to the government. It acknowledged that the Zapruder family was entitled to reimbursement as owners of private property taken by the government for public use, but establishing the value was difficult. the case eventually went to arbitration, and a three-member panel awarded $16 million to the family, the highest amount ever paid for a historical artifact. One of the panel members disagreed - he thought that $3 - $5 million would have been more realistic, as the family had always controlled the licensing of images from the film. The issue lay with the value of the original film strip as a collectible object. Since there have been no documented sales of any other historically significant original film strips, the dissenting member of the panel felt the value was in the image and not in the film strip itself.


New York Times Lens: 50 Years Later, the Story Behind the Photos of Robert Kennedy’s Assassination
Via ABC News: From campaign to tragedy: A look at Robert Kennedy's final days

Bill Eppridge was one of the most accomplished photojournalists of the Twentieth Century and captured some of the most significant moments in American history: he covered wars, political campaigns, heroin addiction, the arrival of the Beatles in the United States, Vietnam, Woodstock, the summer and winter Olympics, and perhaps the most dramatic moment of his career - the assassination of Senator Robert Kennedy in Los Angeles. Over the last 60 years, his work appeared in numerous publications, including National Geographic, Life, and Sports Illustrated; and has been exhibited in museums throughout the world.

Monroe Gallery of Photography, 112 Don Gaspar, is honored to announce an extensive exhibition of more than 50 photographs by Bill Eppridge (1938 – 2013). The exhibit opens with a reception on Friday, June 29, from 5 - 7 PM with Eppridge’s wife and longtime collaborator Adrienne Aurichio in attendance; and continues through September 15, 2018.

A new book of Eppridge’s photographs, “Becoming Barbra”, presents a never-before-seen look at Barbra Streisand as she was becoming a star. From the humble beginnings of Barbra Streisand’s career in 1963 to full-fledged stardom in 1966, Eppridge had full access to the young singer. “This is the first book of Bill’s photographs that he did not live to see published … It took so long because many publishers didn’t want to publish the book without Barbra’s approval”, said Aurichio, who will be signing copies of the book during the opening reception.