Bob Gomel got closer than he wanted to JFK’s funeral 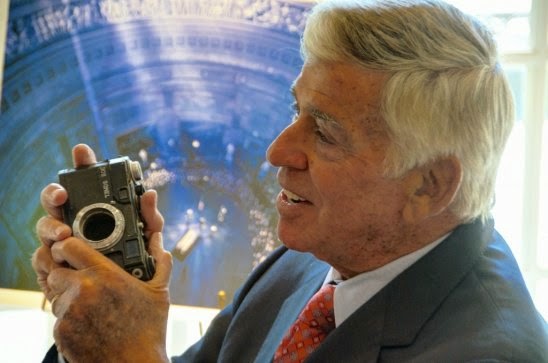 Bob Gomel poses with one of the cameras he used while covering pop culture for Life magazine in the 60s Slide show here.

EDITOR’S NOTE: Last year as the 50th anniversary of the assassination of John F. Kennedy loomed, The Texican visited with noted photographer and Houston native Bob Gomel at his home in the Memorial area to talk about his career behind the lens. Gomel captured some of the most poignant images of the funeral of the slain president that the world would ever see. It was an especially sad assignment for Gomel, who once spent an afternoon with Kennedy watching football while he was on the campaign trail. With the 51st anniversary on Saturday, here’s a look back at that profile of Gomel, 81, who still keeps busy globetrotting with his trusty collection of cameras.

As a Life magazine photographer in the ’60s, Bob Gomel saw some of the most pivotal moments in pop culture history through the lens of his Nikon.

A hallway in his Memorial home is lined with crisp, perfectly matted and framed shots that he snapped of Muhammad Ali, Marilyn Monroe, The Beatles, Richard Nixon, and Dustin Hoffman. Each photo comes with a rich story from Gomel that leaves the listener with a perma-grin.
But it is Gomel’s most celebrated subject, President John F. Kennedy, that has brought him the most notoriety — and the most sadness. Capturing the funeral of a man he had grown personally close to was not in his plan.

There was an afternoon late in 1960 when then President-elect Kennedy, Gomel, and another photog spent a few rather normal hours together that he’ll always remember with great pride.
“Kennedy was working and living in a brownstone in Georgetown picking out his cabinet for his first term,” says Gomel, who was waiting to capture the first shots of newly appointed cabinet members. It was slow going some days. Men in suits would come in and out, with little or no word to the press.
“There was just two of us left outside on a cold, dreary Saturday afternoon, so Kennedy invited us inside to watch the Army-Navy football game,” he says. That other man was noted Washington news photog James Atherton, no slouch in his own right. Atherton passed away in 2011.

They went inside and TV trays were brought out. Kennedy, Gomel, Atherton, and some Kennedy staffers ate steak and baked potatoes and watched the game.

“The next thing I remember is Jim waking me up, telling me that Navy won and that I fell asleep on the president,” Gomel says. From then on Kennedy would always have fun with him about it.
Gomel’s photographic journey began at 11 years old, when he delivered groceries on his bicycle for one hot summer in the Bronx, making just enough cash for a Circoflex camera. It cost him $88 — not a small chunk of change in 1944 — but what he wanted more than anything was a camera of his own that didn’t belong to his parents. He wanted to explore the world with a lens, even if it was just the Bronx.

After graduating from New York University, a hitch as a Navy pilot during the tail-end of the Korean War only made him yearn for a life behind the lens even more.

Gomel left Life at the end of 1969 and opened up his own studio in Manhattan. He did commercial work for the likes of Audi, Shell, Pan Am, Volkswagen, and Merrill Lynch before heading to Houston in the late ’70s to to take part in the oil boom.

Now 80 years old, the Manhattan-born, Bronx-raised and proud Houstonian of nearly 40 years hasn’t slowed down a bit, and neither has his trigger finger. When I spoke with him on a sunny afternoon this week, he was giddily telling me about one of his upcoming, month-long photography trips to South India.

“Houston was so exciting at that time, there was so much going on,” he says. “You could work 8 days a week here.”

The hubbub surrounding the 50th anniversary of the assassination of Kennedy means that there are new documentaries, news packages, and online and print stories to resurrect old feelings. Men like Gomel that were on the front lines of history aren’t so cynical about the situation.

“What’s troubling me is the cockamamie work of people trying to capitalize on the anniversary with their assassination theories,” says Gomel. “I have to concur with a preponderance of analysts that Oswald acted alone.”

He was in New York when he found out about the assassination in Dallas. He showed up to work at the Life offices to find that everyone who was on staff was ordered to leave immediately for Washington.

“There was no time to even pack a toothbrush,” he says.

He got into Washington, D.C., on the morning of Nov. 23, just in time to arrive at the White House to see the president’s body being brought back home. From then on, Gomel was shooting everything in front of him.

The mood that week still makes him shudder. The stun in everyone’s eyes, the disbelief and shock was surreal.

“We hadn’t experienced anything like that in our lifetime; it was a series of shocks. It was more than we could comprehend at one time,” he says.

Couriers picked up film every hour to fly it back to New York to get it developed. Sleep was a rarity.
Gomel’s shot of Kennedy’s casket lying in state in the U.S. Capitol rotunda as thousands upon thousands filed in to pay their respects is haunting in its simplicity and scope. The blue hue came from some intervention from the man upstairs, he says. He had been down on the main floor but decided to explore the potential of the balcony above. He found a door that had access and he went up there.

“It was just the right time of day to capture a little bit of light coming through.”

He would shoot from nearly the same vantage point for President Dwight D. Eisenhower’s funeral in March 1969, but from much higher in the rotunda.

The graveside services for Kennedy at Arlington National Cemetery on Nov. 25 featured dozens of heads of state from around the world. There was Charles de Gaulle, Haile Selassie I, Chancellor Ludwig Wilhelm Erhard, and Gomel, somehow right in the mix. He wasn’t exactly supposed to be that close to the world’s leaders.

“I learned only recently at a Life magazine reunion that we didn’t even have credentials for Arlington National Cemetery,” he laughs.

The Life staff had rented a limousine for the funeral and were accidentally put into the official motorcade with all the heads of state.

“I had a front row seat,” Gomel says. His photo, with de Gaulle solemnly saluting the casket of Kennedy and the others looking on in reverence, shows just how packed Kennedy’s service was. He estimates there are 60-plus dignitaries in the photo. Somewhere there is a list of everyone shown.
Getting the best shots sometimes had to come by hook or by crook, on boss’s orders.

“We had to find a way to get pictures. We had an admonition from our editor to not come back with just excuses,” he says.

During the viewing and funeral, Gomel found himself putting aside his personal relationship with Kennedy for work. He was 100 percent concerned with reporting it and capturing all the details with his camera.

“I had to disconnect from my association with the president and the fact he knew my name,” he says.
Gomel was in Houston with the president when he made his famous Moon Race speech at Rice University in September 1962. You can spy the photog in the background of a picture of Kennedy here in town, too.

“I can remember it clearly today,” said Gomel. “He has his fist clenched on the podium, and his delivery was so dynamic. He made all of us believe this was possible and achievable.”

Gomel captured a candid shot of Kennedy climbing out of a space capsule at NASA, which he’s extremely proud of. It’s in his home gallery, and one of the first photos you see when you come into his house. It’s symbolic of the country finally making it to the moon, just as Kennedy wanted.
After the 50th anniversary specials and tributes die down after Nov. 22, Gomel will continue to reflect on what he was a part of all those years ago.

“I wish I didn’t have to have that experience. I have gotten a small degree of fame from it, but I wish it came from another source.”

This fall he’s been a busy man, recounting a week of his life 50 years ago, a week that he wishes he wouldn’t have played such a small, but every important role in.

Gomel was on a team of Life photographers tasked with capturing every step of Kennedy’s funeral in November 1963. Gomel was all of 30 years old, thrust into an American nightmare, and assigned to document it all for folks at home. The somber proceedings threw a dark shroud over the country, but Gomel had to keep snapping photos. The fact that the slain president actually knew his name after years of Life coverage made the situation all the more harder for Gomel, who had been orbiting around Kennedy since before he was even elected president.