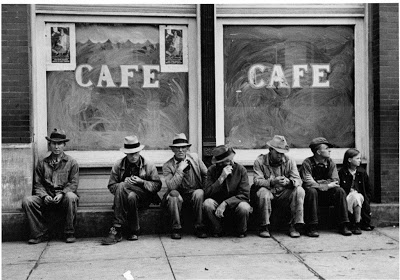 Cafe in Pikesville, Tennessee, 1936 (for the Farm Security Administration)
Monroe Gallery of Photography is pleased to announce "Carl Mydans: The Early Years”. (Carl Mydans: May 20, 1907 – August 16, 2004) The exhibition opens with a reception Friday, October 1, 5 - 7 PM, and continues through November 21.


Born in Massachusetts, near Boston, in 1907, Mydans’ keen sensitivity and honesty compelled him toward a lifetime of social and historical documentary photography. After working for the Boston Globe and the Boston Herald, he joined the photographic staff of the Farm Security Administration in 1936. The FSA, as it was familiarly known, was a New Deal agency established during the Great Depression by Franklin Roosevelt designed to combat rural poverty during a period when the agricultural climate and national economy were causing great dislocations in rural life. The photographers who worked under the name of the FSA were hired on for public relations; they were supposed to provide visual evidence that there was need, and that the FSA programs were meeting that need. Roy Stryker, who Mydans described as one of the most important influences in his life, headed the FSA. Stryker hired Mydans, along with several other photographers who were also later to become legendary, such as Walker Evans, Gordon Parks, Dorothea Lange, and Arthur Rothstein, to document the conditions of people and their surroundings most affected by the Depression. 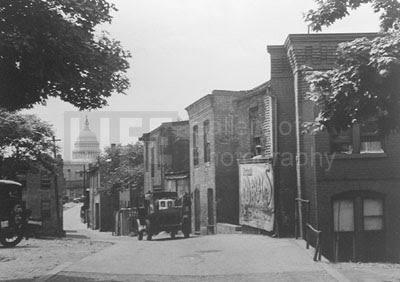 The Nation's Capitol viewed from a nearby slum area, Washington, DC (for the Farm Security Administration)

“My very first period, when I was photographing with the FSA, I consider to be my most meaningful body of work. Before that, I didn’t know what America really was. I learned who the people were, what they thought, what they did, what they read and what they cooked and ate. There are some things that come back to me, and when I see a farmer tilling his rice in Asia, there’s something about that Asian farmer that carries me back to our own American farmers in 1936. In a word, that experience I had working with the FSA, in 1936 and 1937, gave me a greater feeling for America, and from that a greater feeling for the people of the world.” – Carl Mydans, 1997 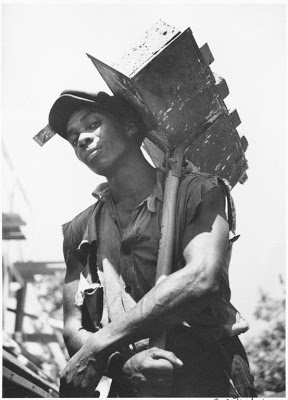 Brick carrier at model community planned by the Suburban Division of the U.S. Resettlement Administration, Greenbelt, Maryland, 1936 (for the Farm Security Administration)
Featured in the exhibition is a rare and distinct collection of limited-edition prints from the FSA archives, specially selected from a large body of his work that is owned by the United States government. These prints were all made in by Mydans in1993 from his original negatives, which he borrowed from the Library of Congress. Each of the FSA photographs were signed by Mr. Mydans, and each image is limited to a total edition of between just six and fifteen examples.

After 16 months with the government, Mydans joined LIFE magazine as a staff photographer in 1936, just after the inaugural issue. Included in the exhibition are rare early vintage prints from the archives of LIFE magazine - the actual prints used for early LIFE magazine stories, with important archive information inscribed and stamped on the back of each photograph. Together with the FSA photographs, they provide a humanitarian and emotional record of this turbulent time in American history, an integral element to their lasting appeal over 70 years later.

Over four decades, Mydans carried out the full gamut of typical Life stories, from Hollywood celebrities to Texas cattle roundups, but his most important assignment, starting with the Soviet invasion of Finland in 1939, was as a war photographer. Resourceful, determined and unruffled, Mr. Mydans managed to send back pictures of combat that even now define how we remember World War II, Korea and other conflicts. He photographed major news and feature stories in the United States, Europe, and Asia. Mydans reported on the Russo-Finnish winter war, Italy under Mussolini, and the fall of France. When war erupted in Europe, Mydans and his wife, LIFE researcher Shelley Smith, became the magazine’s first husband and wife team to be sent overseas. Constantly traveling, Mydans’ assignments took him to Britain, Sweden, Finland, Italy, France, China, Malaya, and the Philippines, where he and his wife were captured by the Japanese. Released after being held prisoner of war for two years, Mydans was sent back into war in 1944, eventually covering the stoic figure of General MacArthur landing at Luzon. This famous image eloquently captures the pride and determination of the great commander and stands in dramatic contrast to the sense of shame and resignation expressed in the photographs he made of the Japanese surrender aboard the U.S.S. Missouri from the same year. 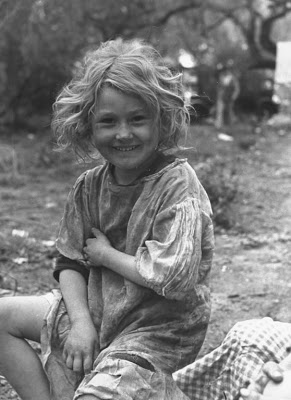 Daughter of migrant workes near Raymondville, Texas, 1937 (vintage print)
“As a storyteller in pictures, the photojournalist is looking not only for action but for substance. He is a historian and a sociologist. He has created humanity’s first international language, a common imagery for all mankind. And in his pictures, people see themselves with a clarity they never knew before.”--Carl Mydans