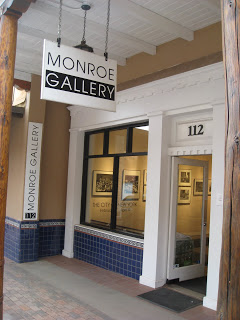 We are very pleased to welcome Eric Draper as our special guest Friday evening. Draper served as Special Assistant to the President and White House Photographer for President George W. Bush. Draper documented the entire eight years of the Bush administration and directed the conversion of the White House Photo Office from film to digital, and two of his photographs from September 11, 2001 are featured in the exhibition.

Among the exhibition’s many recognizable images:

Robert Capa: D-Day, Omaha Beach, Normandy, 6th June, 1944. Capa is perhaps the best known of all World War II combat photographers. For a split second this short exposure places us shoulder to shoulder with the soldiers of the 16th regiment landing at Omaha Beach. Epitomizing Capa’s remark that "...if your pictures aren't good enough, you aren't close enough” the photograph of the GI’s struggling through the churning surf has survived as the definitive image of the Normandy invasion.

Joe Rosenthal: Marines Raise the Flag on Iwo Jima, February 23, 1945: It had been four days since the AP's Joe Rosenthal landed on the Pacific island of Iwo Jima. The hail of Japanese fire had not let up. During one of the bloodiest battles of World War II, U.S. Marines captured Mount Suribachi, a volcanic peak on the southern tip of the island. Jubilant, they raised a flag and Rosenthal made a photograph that has been called "the greatest photograph of all time".

Robert Jackson: Jack Ruby Shoots Lee Harvey Oswald, November 24, 1964
When Oswald was brought out, Jackson raised his camera as Jack Ruby stepped in front of him. Jackson described the moment: “My first reaction was, ‘This guy’s getting in my way.’ Ruby took two steps and fired—and I guess I fired about the same time.”

Eddie Adams’ Execution in Saigon, South Vietnam, February 1, 1968
This is one of the most memorable images in the history of war photography. We are witnessing an individual’s fear a fraction of a second before the loss of his life. Adam’s photograph appeared on the front page of The New York Times the day after it was taken and was syndicated worldwide, mobilizing public opinion against the Vietnam War.

Nina Berman's photo essay "Marine Wedding" is a series of unstaged photos of Sergeant Ty Ziegel, then 24, back home as he prepares for his wedding to his high school sweetheart Renee Klein, then 21. Ziegel survived a suicide bomber attack in Iraq, but was severely disfigured and needed 50 reconstructive operations. Exhibited at the 2010 Whitney Biennial, the photographs are a stark reminder that these wars have consequences and many of our sons and daughters are having their lives permanently altered in faraway lands. Berman has said in interviews that she started photographing disabled veterans soon after the war began mainly because she didn’t see anyone else doing so.

--Former Life, People, and Time Inc. editors Richard Stolley and Hal Wingo will lead a discussion on the impact of Photojournalism through history at a special salon at the gallery during the exhibition August 5, from 5 - 7 PM.

Monroe Gallery of Photography was founded by Sidney S. Monroe and Michelle A. Monroe. Building on more than five decades of collective experience, the gallery specializes in classic black and white photography with an emphasis on humanist and photojournalist imagery. The gallery also represents a select group of contemporary and emerging photographers and exhibits nationally at prestigious Photography Fairs. Monroe Gallery was the recipient of the 2010 Alfred Eisenstaedt Award for Excellence in Photojournalism.