"David Butow was working in D.C. during some of the most historic moments of the last five years" 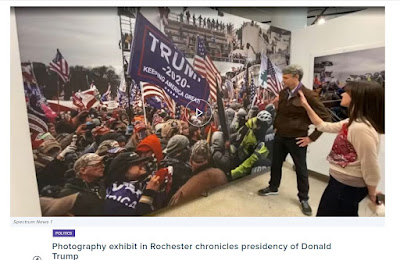 ROCHESTER, N.Y. â€” Some of the most historic moments of the last five years are now on display in Rochester.

It's the work of a photojournalist in Washington, D.C. who describes what the pictures say that the written word can not.

"I see the enthusiasm these 20-year-olds have right now," said Butow. "I shared that exact same feeling and that sense of excitement when I was that age."

He was at the Rochester Institute of Technology helping to review student portfolios. His own photography has taken him all over the world.

"No matter where youâ€™re from, you can look at a picture of another human being and have a certain, perhaps, empathy for them, and relate to them on a very basic, human level," he said.

In downtown Rochester, RITâ€™s City Art Space is hosting a gallery of some of his most recent work. It's a collection from his new book "BRINK," which chronicles the presidency of Donald Trump.

"I just thought this is going to be a very unusual time in American politics and maybe American history, and I just wanted to see it up close," said Butow. "Thatâ€™s kind of the instinct of a journalist."

RIT Assistant Professor Jenn Poggi served as a key editor of the project.

The two used to work together at U.S. News & World Report in the early 2000s.

"The beautiful work always pops out, the amazing work," said Poggi. "I think the challenge comes fromâ€¦ whatâ€™s the narrative youâ€™re trying to construct. And sometimes that means losing an image that could be a favorite, but doesnâ€™t quite match with the direction the book is trying to take."

David was working in D.C. during some of the most historic moments of the last five years.

"Iâ€™m really curious what happens outside the frame of the TV camera," Butow said. "So itâ€™s sort of like, whatâ€™s it actually like to be there? What are the things you see that you canâ€™t see when youâ€™re watching this big hearing on TV?"

His work concluded with the January 6 insurrection where hundreds stormed the U.S. Capitol.

"The scale of this, and the amount of violence and energy pushing up into the Capitol, took me completely by surprise," he said.

The event gave him the name of his book: "Brink."

"And thatâ€™s when really the gravitas of what has transpired became apparent to me," Butow said. "That there was no denying how serious of a period in American history it was, and how close our democracy came to not functioning."

But whether people buy his book or come view the exhibit downtown, Jenn and David hope it helps people experience history in a different way.

"I think that the book and exhibit seek to ask a lot of questions, more than give answers," Poggi said. "And I hope people think about that."

"There were so many small things that happened every day, day after day, that you sort of forget what it all added up to," Butow said. "And how significant of a moment in U.S. history it was. And itâ€™s still continuing, a lot of these dynamics are still very much in place."

The exhibit and gallery are located near the Liberty Pole in downtown Rochester. It's free and open to the public through Feb. 20.