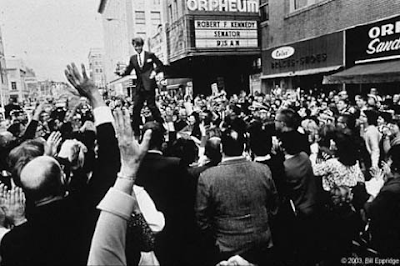 On June 5, 1968, Eppridge took a famous photo of Kennedy lying on the floor of the Ambassador Hotel in Los Angeles, moments after he had been shot.

“There is not a day that goes by that I don’t think about that man,” Eppridge said.

Now, with politics on center stage in Charlotte, a special exhibit featuring nearly 40 of Eppridge’s photos of Kennedy will be on display.

The show, “One America, One American,” is sponsored by The Echo Foundation and The Charlotte Observer.

Eppridge, born in 1938 and still taking photographs, will attend the opening, as will Kennedy’s oldest daughter, Kathleen Kennedy Townsend, a former lieutenant governor of Maryland. Townsend will accept the foundation’s inaugural Family Legacy Award on behalf of the Kennedy family.

Eppridge, a self-taught photographer and veteran of Life, National Geographic and Sports Illustrated, said the exhibit’s timing – coinciding with the Democratic National Convention – is “really special.”
“I think a lot of (delegates) don’t really know who he was or what he stood for or the importance of that man, and maybe this will get them thinking about where we’ve been or where we might be able to go,” he said.

Before Kennedy became a Democratic senator from New York, he was attorney general in the administration of his brother, John F. Kennedy, who was assassinated in 1963. Bobby Kennedy was an icon of the civil rights movement and took a strong stance against the war in Vietnam.
Eppridge said Bobby Kennedy’s importance lay in his honesty, popularity and dedication to getting troops home from Vietnam as soon as possible.

“I had quite unusual access to that man. I heard and saw and knew things that other people didn’t, and I realized that he was dead serious when he told us, ‘We are out of Vietnam on the day I take office,’ ” Eppridge said. “I don’t think anything was impossible to him.”

The Echo Foundation will also display the winning photographs from its international student photojournalism competition, which sought photography responding to the question, “What does democracy or tyranny; justice or injustice look like?”

From more than 500 entries from students across the globe, Tobin Jones, who attends the University of Westminster in the United Kingdom, was chosen as grand-prize winner.

Jones won the opportunity to travel to Charlotte during the convention and take photos alongside Eppridge for one day.
Copyright 2012 The Charlotte Observer. All rights reserved. This material may not be published, broadcast, rewritten or redistributed.