Do you think the photographers that put themselves out there on the extreme edge of society do it so they can get a write up in the media about themselves? 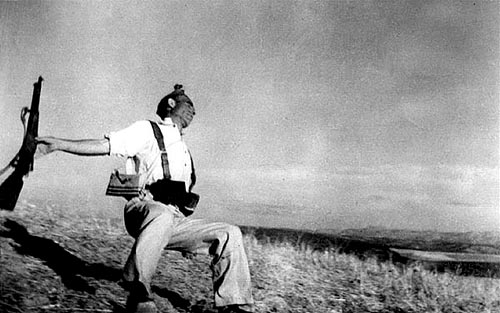 Duckrabbit recently posted an article that is creating a bit of a debate: The war photographer’s biggest story: themselves. The full article is just below, with links to follow-up comments.

We are always interested in conversation concerning photojournalism, and this is shaping up to be a good one to follow. In conjunction with the current exhibition, "History's Big Picture", we have started a series of posts of selected quotes from photojournalists commenting on their professions. To date, Carl Mydans and Eddie Adams have been featured, more to follow on our blog.

How many actual proper photography based journalistic stories from Libya can you recall?

Did anybody follow a Dr for 24 hrs, as opposed to just firing off shots randomly in the hospital? Did anyone hole up with a family for a few days? Did anyone track the journey of a migrant trying to escape, as opposed to just taking a few snaps of them waiting at the docks? They must have done, but I never got to see the pics. Just lots of pictures of men (better if it’s a boy) firing rockets randomly into the dessert and a few charred remains.

Isn’t there something really screwed about the fact that the people in the pictures, what’s happening to them in a conflict, now seems to be of significantly less interest then what happens to the person taking the picture?

It makes a mockery of the already daft concept of ‘objective journalism’. And its dangerous. Because it perpetuates the myth of the heroic war photographer, encourages other young people to go in search of the glamour of the gun and ends with mostly local people getting injured or killed. But for what?

Can anyone seriously argue that there was news value in printing Guy Martin’s Libya photos thirty eight days after he was wounded in Misurata? You can see a few of them here in the News section of the Telegraph. How can a series of photos be published in a News section and not even be dated? It’s inconceivable that they would have been printed as a six page spread if Martin had not been wounded. The message is simple. The photographer is the story.

The Telegraph carries an account of the day Martin was injured:

On April 20 a group of five photographers, including the Oscar-nominated British photojournalist Tim Hetherington and the Pulitzer prize-winning photographer Chris Hondros, came under fire in the besieged Libyan city of Misurata. They had spent the morning following rebel units as they fought at close quarters to clear Muammar Gaddafi’s forces from their town. That afternoon they were hit by a mortar attack.

Something is missing and that’s the Libyans who were also hurt in the attack. What happened to their stories?

The stories of the people that the photographers are risking their lives to tell have been written out of the picture.

And what about the medical team who saved Martin’s life? Nothing. The real heroes don’t count.

In some circles more has been made of a Libyan soldier or two groping a photographer than children being killed in Nato bombings. Again, how fucked up is that? How shameful of this scene that celebrates itself above all else.

Often when a war photographer dies the platitudes focus on the idea that they are involved in some selfless act; that in some way they sacrificed themselves for us. If you really want to make a difference in a warzone become a DR, a water and sanitation engineer, or a human rights observer working for the Red Cross. Yes the media are important but its nuts to be applauding people who turn up uninsured, without assignment and place themselves in the heat of a civil war, which is already well covered by the wires, newspapers, TV networks and content provided by Libyans themselves. Its nuts because it encourages others to do the same thing in the hope of making a name for themselves.

In the world of photojournalism to point out these facts is the equivalent of breaking honor amongst thieves. The feelings of individual photographers, who have been injured, or whose friends have been injured, are seemingly more important than having an honest discussion about the photographers shifting place within the narratives of war.

That’s dumb and its two faced. No-one should point their lens at the world if they’re not prepared to have it pointed back at them.

Why I am writing this now? A few days ago I recieved an email from Sara Terry who runs the Aftermath Grant announcing a new grant of $20000:

We are able to offer this year-long grant to conflict photographers who want to pursue a project about the aftermath in their own lives of covering conflict. The subject can be approached in any way – portraits, landscapes, reportage, collaboration with a family of someone who has been killed, anything that explores the personal aftermath of covering war, whether that be PTSD, the aftermath of sexual assault, the aftermath of being wounded. This is a very open and fluid call for proposals on this subject, and we welcome any and all approaches. We are very interested in supporting a dialogue about this kind of aftermath – both for the photographer who wins the grant, and for the broader audience who we hope will engage with the work when the grant winner’s year is finished.

Like I say, forget the people in the photos. The biggest story is yourself. The more fucked up the better.