Ed Kashi: ‘This image was a breakthrough. I began to see the world anew’

‘This image was a breakthrough. I began to see the world anew’ 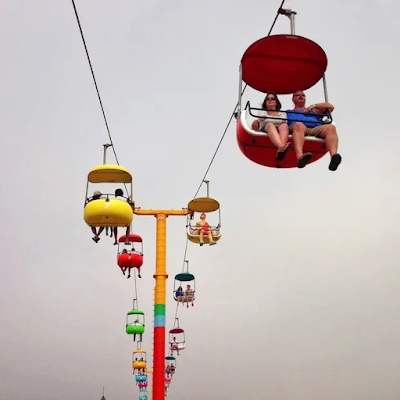 Ed Kashi regards his shot of a California aerial tram ride as a personal turning point. For three decades, on assignment in countries including Nigeria, Iraq and Pakistan, he had taken countless images of civil discord and extreme suffering. “I had absorbed that trauma – many photojournalists do. Often our singular goal is to get as close as possible to the most horrible things on Earth and document them,” Kashi says. “I needed to rehabilitate myself, to make a photo that was soft, beautiful and candy-coloured – to expand my emotional range. This image was a breakthrough. I began to see the world anew.”

Kashi describes this period as the “Plasticine era of Instagram”, a time when the smartphone was transitioning from “a fun, novelty toy to a viable tool for an image maker”.

The shot was taken at an amusement park in the US city of Santa Cruz on a day trip with college students, during the afternoon session of a photography workshop Kashi was conducting. “When I’m ‘on’ as a photojournalist, I’m always looking for and responding to visual clues, whether it’s the horizon or the light,” he says.

Spontaneously boarding the aerial tram, he reached for his iPhone 5 instead of his usual 35mm camera. Even in an amusement park dedicated to pleasure and fun, he saw darker undercurrents (not least the plastic figure taking a ride). “The people in the shot aren’t beaming,” he says. “Their facial expressions suggest that perhaps they’re hungry, or tired, or just had a fight. That’s just being human.” And, as the cabin rose, a thought he’d had in far more serious contexts urged him on: “The photo gods have bestowed this upon me – don’t screw it up.”