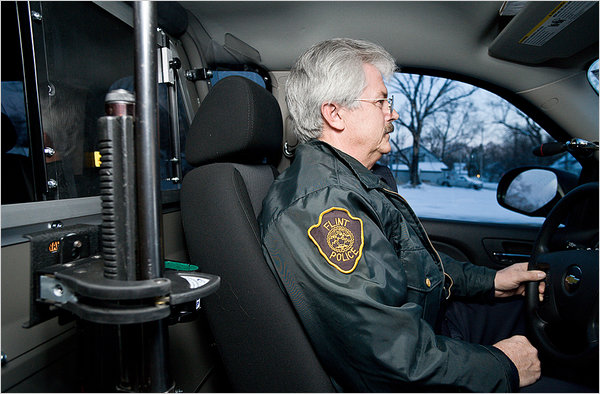 Riding Along With the Cops in Murdertown, U.S.A.

A sign taped to the entrance of police headquarters says it all: “Closed weekends and holidays.” Every weekday, the doors are locked at dusk.

It’s not that the cops here are scared; it’s just that they’re outmanned, outgunned and flat broke.


Flint is the birthplace of General Motors and the home of the U.A.W.’s first big strike. In case you didn’t know this, the words “Vehicle City” are spelled out on the archway spanning the Flint River.

But the name is a lie. Flint isn’t Vehicle City anymore. The Buick City complex is gone. The spark-plug plant is gone. Fisher Body is gone.

What Flint is now is one of America’s murder capitals. Last year in Flint, population 102,000, there were 66 documented murders. The murder rate here is worse than those in Newark and St. Louis and New Orleans. It’s even worse than Baghdad’s.

After the door is unlocked and I enter police headquarters, it is easy to see why. There are only six patrolmen on duty for a Saturday night. So broke is Flint that the city laid off two-thirds of its police force in the last three years. The front desk looks like a dusty museum piece.

I am assigned to ride along with Officer Steve Howe, a 20-year-veteran of the department. Caucasian. Late 50s. Medium build. Mustache. Clump of very well-kempt salt-and-pepper hair.

I sign a release form and am given a bulletproof vest.

"Isn’t that a little bit much?” I ask the sergeant on duty.

“You have to sign your life away,” he tells me.

Cops can be a suspicious, insular lot when it comes to reporters. But Howe and the others are blunt and self-effacing. “We ain’t cops anymore,” Howe says. “We’re librarians. We take reports. We don’t fight crime.”

He guides me through the yellowing jail cells upstairs that had to be closed down recently because of lack of manpower. “If you break into someone’s house, we can’t hold you,” he says with a straight face. “If you’ve got a weapon or you’ve murdered somebody, then county will take you. I don’t see any light at the end of this tunnel. Only darkness.”

We leave headquarters and head out into the night. Howe turns up the heat in his Chevy cruiser and switches on the computer.

“That’s something,” I say hopefully. “Some squad cars in Detroit don’t even have computers.”

When it does, I see that there are more than 12 runs stacked up, including a kidnapping call that is more than six hours old. A home-invader call is two hours old. A “man with a gun” call is 90-minutes old.

“Sometimes, we don’t get to a call for two days,” he says. Last fall, an elderly couple called after being held up at gunpoint in their driveway. The police arrived on the scene five hours later.

We drive 50 miles through the evening, and the city flashes by us in all its monotony. Liquor store. Gas station. Liquor store. Hi-C, 25 cents. Catfish steaks, $1.25. Regular unleaded, $3.65.

The action isn’t heavy tonight, either. Domestic disputes, mostly. A woman will not let her brother into the house, having already destroyed his furniture with a pipe and thrown his clothing into the snow. Another man has beaten his girlfriend and locked himself inside a neighbor’s house. Howe takes reports. The kidnapping call gathers dust.

We pass by an abandoned Victorian with a sign neatly spray-painted on the peeling door: “Please don’t burn.”

Nature calls. Howe pulls into the 7-Eleven for a toilet break and a Big Gulp. As we get out of the car, I see a blue flash of light near the side of the store and the sound of gunfire. A shadow runs toward the apartment complex.

Someone might have just become the 14th homicide victim of 2011, and winter hasn’t even broken yet.

Howe calls in: “Shots fired.” He gives the following description: A shadow wearing a hood. And in less than two minutes, the entire Flint police force on patrol swarms the area. All six of them. They find no gun and no victim. They do, however, round up a fidgety kid in a hood, but since he doesn’t have a gun, they kick him loose.

Frustrated, Howe heads back to the car and watches the kid walk away. Two more people are killed in Flint the following week.

Eric Smith: The Patriot Guard and The Westboro Baptist Church