Exhibit explores history of police use of force 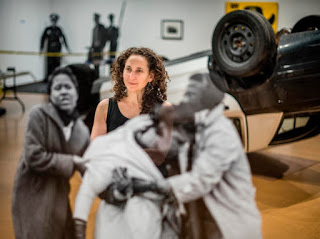 Karen Fiss is one of the two curators of â€œNecessary Force: Art in the Police State.â€ She is standing in front of â€œAmelia Falling 2014â€ by Hank Willis Thomas. The exhibit is in the University of New Mexico Art Museum and will be on display until Dec. 12. (Roberto E. Rosales/Albuquerque Journal)
An art exhibit opens tonight in Albuquerque thatâ€™s sure to generate discussion, and possibly controversy.

â€œNecessary Force: Art in the Police Stateâ€ includes work from 31 artists, and covers such historical themes as the civil rights movement to more current events such as the James Boyd shooting here and the Ferguson, Mo., riots that started after Michael Brown was fatally shot by a police officer.

â€œThis exhibit is getting the dialog started about the problems our society is facing,â€ said co-curator Kymberly Pinder. â€œThese are problems that have existed for a long time. The show balances what todayâ€™s society is dealing with in conjunction to what has happened in the past.â€

Pinder, who also is dean of the UNM College of Fine Arts, and Karen Fiss, a professor at the California College of Arts, worked on pulling together the exhibit for the past year.

If you go
WHAT: â€œNecessary Force: Art in the Police Stateâ€
WHEN: Opening at 6 tonight. 10 a.m.-4 p.m. Tuesday-Friday, 10 a.m.-8 p.m. Saturday through Dec. 12
WHERE: Main Gallery, UNM Art Museum, UNM campus
HOW MUCH: Free
It is in the University of New Mexico Art Museum, and will be on display until Dec. 12.

â€œArt is not just to entertain; it can also be challenging and thought provoking,â€ the curators said in their exhibition statement. â€œThe term â€˜necessary forceâ€™ is the art created by artists who feel an urgent need to respond to contemporary events that reflect a society that is increasingly policed on many levels and how that affects us all. The words â€˜police stateâ€™ are used because these artists address this increased policing and the many social conditions that contribute to the complex history of police violence in the United States.â€

The majority of the works are responding to actual events. Documentary photographs from the 1960s and â€™70s from the museumâ€™s renowned collection stand alongside work by contemporary artists, which includes an installation of an overturned police car to a piece that points out items that were mistaken for guns.

â€œThe juxtaposition of historic and recent imagery helps us assess the evolution of these pressing social issues over the 50 years since the Civil Rights movement,â€ Pinder said.

The exhibit comes after a Department of Justice investigation found that Albuquerque police used excessive force for years, and as the department tries to comply with a court order to overhaul its practices.

Pinder said the curators and artists hope to encourage critical thinking and dialogue around the complex history of law enforcement and violence in the United States.

The contemporary works in the exhibition address a range of issues, including surveillance, incarceration, drug abuse, inadequate mental health care, gun violence and racial profiling, as well as the power of collective protest and collective healing.

It also examines the role of photography in shaping public opinion, as well as the longer-term matter of how we come to know and remember history.

The goal for the exhibit falls in line with UNMâ€™s mission to encourage critical thinking, dialogue and problem-solving around issues that are relevant today, Pinder said.

â€œThe caliber of artists that are in the exhibit is profound,â€ Fiss said. â€œThese were artists that showed interest in the show.â€

Pinder always wanted to work with Fiss on a show. The pair have known each other since their graduate studies at Yale University.

A thematically related exhibition, â€œThe Long Road: From Selma to Ferguson,â€ is currently on display at The Monroe Gallery in Santa Fe until Sept. 27.
ï»¿