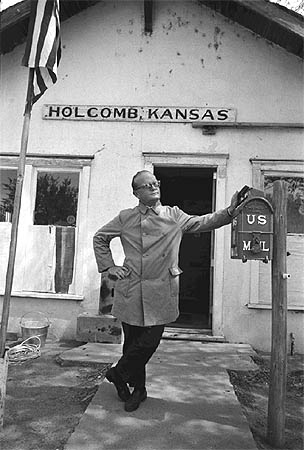 In the words of the great storyteller Eudora Welty, â€œa good snapshot stops a moment from runningaway.â€ Capturing someone on film is a tricky business, particularly when that someone is a famous author or artist. The skill and agility of the photographer is elegantly evidenced in Composing the Artist, an exhibition currently on display at Monroe Gallery. This diverse survey offers an intimate glimpse into some of thepast centuryâ€™s most iconic art personalities.


Abstract artists who emerged in the middle of the twentieth century introduced not only new ways of making art, but in fact encouraged us to look at the very concept and convention of art with fresh eyes. In Helen Frankenthaler, New York (1969) Frankenthaler is in a deep downward bend, pouring a bucket of paint onto a canvas spread out across the floor. She wears an expression of almost otherworldly serenity on her faceâ€”an aspect that stands in sharp contrast to the revolutionary physicality of her actions. This photograph of the incongruously graceful Frankenthaler is placed near an image of Jackson Pollock, who is crouched down in characteristic paint-flinging insouciance with a cigarette dangling from his mouth. Deeply personal portraits like these underscore the intimate and sometimes sensual act involved in the process of a paintingâ€™s creation and make us momentarily privy to the very human activity of artistic expression.

Even a cursory familiarity with the creative luminaries of the past century is helpful in appreciating this show. For example, a 1967 shot of Truman Capoteâ€”dapperly dressed and jauntily posing outside the Holcomb, Kansas post officeâ€”seems playful at first glance; knowing that sleepy Holcomb is the town made infamous by Capote in his crime novel In Cold Blood adds depth and interest to this otherwise lighthearted composition. Fans of Matisse will swoon over Robert Capaâ€™s 1950 portrait of the celebrated abstractionist. The stout eighty-one-year-old painter is holding up a thin, long brush thatâ€™s roughly the length of his body and gently applying paint to a large sheet of paper taped to the wall. The imageâ€™s caption informs us that Matisse is making sketches for the murals of the Chapelle des Dominicains, in Paris. To hold a brush of this length would be an awkward feat for even the most able-bodied young man. Itâ€™s clear, however, that Matisseâ€™s advanced age doesnâ€™t hinder him from his creative endeavors in the slightest. The artistâ€™s calm agility creates a composition of remarkable impact.

Pablo Picasso and FranÃ§oise Gilot pictures the couple walking along a beach. A beaming Picasso is holding a parasol above Gilot, his longtime muse and lover, and one recognizes in their carefree smiles the sort of sun-soaked giddiness that comes with spending a romantic day at the beach. The frayed rim of the straw hat worn by the radiantly beautiful Gilot is offset by the fringed tassels on the parasol carried by Picasso, adding further visual intrigue to the happy scene.

A riveting 1958 portrait of Vladimir Nabokov taken by Carl Mydans captures the author leaning out of a car window, looking over his shoulder with his hair mussed and his eyeglasses halfway down his nose. His eyes twinkle with mischief, and his quiet smile is both disinterested and amused. The subjectâ€™s disheveled appearance contrasts mysteriously with his cunning countenance, making the simple act of looking at a photograph a strangely private experience. A portrait of Ernest Hemingway on a hunting trip with his son in Sun Valley, Idaho, in 1941, is absolutely stunning. The ten- or eleven-year-old boy is lounging nonchalantly against a bridge, his clean bare feet flexed, and itâ€™s clear that this comfortable pair is taking a break from the dayâ€™s activities. The calm, casually postured Hemingway adds a quality of mellow serenity to a scene that is at once unplanned and composed. This quiet look at a moment of relaxation between father and son stops just short of being sentimental, and contains that rare quality that makes photography such a singularly personal and moving art form.

The exhibition standouts are plenty, and Monroe Gallery does a fine job of including a wide range of complex, fascinating characters. Perhaps that clichÃ©d concept of â€œthe good old daysâ€ is a largely exaggerated one, but these photographs nevertheless leave one feeling an almost intoxicating nostalgia for a bygone era marked by creative vigor and intellectual ingenuity.

The exhibition continues through June 26, 2011