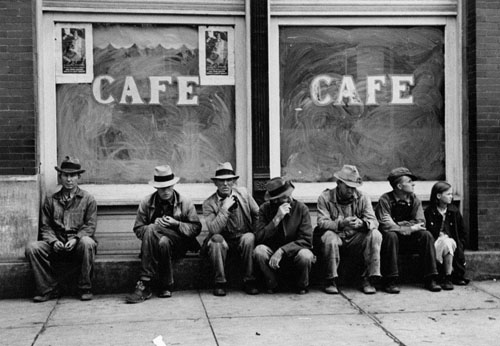 WASHINGTON, D.C.- The more than 172,000 black-and-white and 1,600 color images that comprise the Farm Security Administration Office of War Information (FSA/OWI) Collection at the Library of Congress offer a detailed portrait of life in the United States from the years of the Great Depression through World War II.

Edited by Amy Pastan, an independent editor and book packager, and published by D Giles Ltd. in association with the Library of Congress, each volume in the series includes an introduction to the work of the featured FSA photographer by a leading author.

Gordon Parks, the only black FSA photographer, was "a Renaissance man," writes Charles Johnson in his introduction to the volume. Parks was a writer, musician, poet, composer, photojournalist and motion-picture director, with many "firsts" to his credit. "The first black director in Hollywood, he opened the door for young auteurs, such as Spike Lee and John Singleton," writes Johnson.

The youngest FSA photographer, Arthur Rothstein was "the truest child of the New Deal," writes George Packer in his introductory essay. Fresh out of Columbia University with a belief in the government’s social improvement efforts, Rothstein planned to earn money for medical school. But after joining the government project, he changed his career path. By the age of 25 he was a staff photographer for Look magazine and eventually became its director of photography. He joined Parade magazine in 1972 as director of photography and remained there until his death in 1985.

A graduate of Boston University’s School of Journalism, Carl Mydans was an experienced photographer with credits in Time magazine when he joined the documentary project in 1930. He later moved to the new magazine Life, and on to a celebrated career as a war photographer. Says author Annie Proulx, "He identified himself as a photojournalist and his interest in the massive global events of the time became his life."

Each 63-page, soft-cover volume in the series is available for $12.95 in bookstores throughout the U.S. and the UK, from D Giles Ltd. and the Library of Congress Sales Shop, Washington, D.C., 20540-4985. Credit-card orders are taken at (888) 682-3557, or shop on the Internet at www.loc.gov/shop/. Reproduction numbers are provided in the books so that reprints may be ordered through the Library’s Photoduplication Service.

Founded in 1800, the Library of Congress is the nation’s oldest federal cultural institution. The Library seeks to spark imagination and creativity and to further human understanding and wisdom by providing access to knowledge through its magnificent collections, programs and exhibitions.