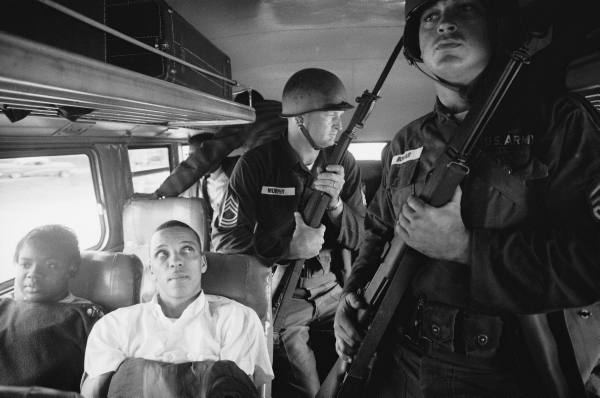 Paul Schutzer: Freedom Riders Julia Aaron & David Dennis sitting on board interstate bus as they and 25 others are escorted by 2 National Guardsmen holding bayonets, on way from Montgomery, AL to Jackson, MS, May, 1961
The Associated Press

Montgomery's former Greyhound Bus Station is reopening as a museum honoring the Freedom Riders on the 50th anniversary of the day they were attacked in the capital city.

The Alabama Historical Commission has prepared the museum in downtown Montgomery and says several of the original Freedom Riders, including Georgia Rep. John Lewis, are scheduled to attend the dedication at 10 a.m. Friday. (Full schedule here.)

The Freedom Riders were trying to integrate Southern bus stations when they arrived in Montgomery on May 20, 1961. They were beaten by an angry white mob because no law enforcement officers were on hand.

The new museum is a few blocks from some of Montgomery's other civil rights attractions, including the Rosa Parks Library, the Civil Rights Memorial and the Dexter Avenue King Memorial Baptist Church.

----On the 50th anniversary of a night when a savage mob trapped Riders and others in a church in Montgomery, Alabama -- with no guarantee that they would not torch the church and everyone inside -- LIFE.com looks back at one of the most terrifying, and pivotal, moments