Giving Thanks for Photography 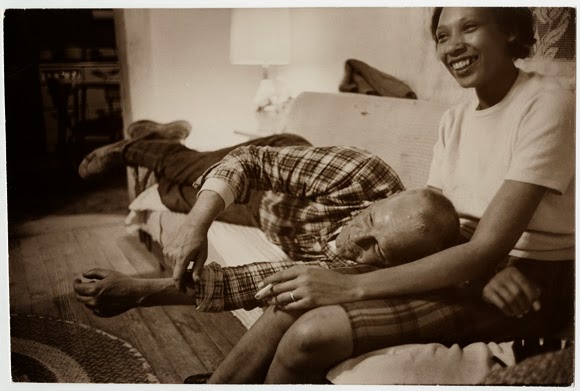 “Richard and Mildred Loving” (1965), by Grey Villet.
Courtesy of the estate of Grey Villet.
Via The New Yorker:  a selection of eight writers on photographs that they are thankful for.

Recently, I’ve been travelling in the Deep South, pausing at civil-rights sites along my reporting route—Martin Luther King, Jr.,’s’s bomb-pocked parsonage in Montgomery, Alabama, for starters, and Birmingham’s Sixteenth Street Baptist Church. Most of the landmarks that I’ve visited display iconic photographs of the movement’s labors, largely rooted in the politics and aesthetics of struggle: black youth and integrated Freedom Riders standing, disobediently civil, before snarling police dogs and sneering lunch-counter crowds. Here, though, I’ve plucked a photograph from the movement that draws its strength less from struggle than from domestic affection, which seems well-suited to file under “Thanksgiving”: an image from Grey Villet’s 1965 series, for Life magazine, on Richard and Mildred Loving, the interracial couple in Central Point, Virginia, who helped to end the interminable era of anti-miscegenation statutes. The power of the series lies in the quiet intimacies that it captures. Mostly, the photos depict everyday life: eating, idling, kissing, conferring. In this particular shot, the Lovings watch TV and laugh—a reminder that to lounge about in simple communion can sometimes be beautifully subversive, too.