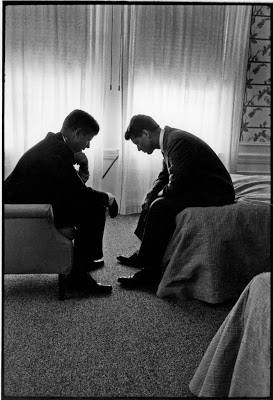 La Journal de la Photographie has been running a series of excerpts of interviews with several Great Life Photographers. This photograph is a particular favorite of ours.

"At the 1960 Democratic Convention, where everybody was shooting pictures like crazy, I was doing a story on Bobby Kennedy. The morning after Jack was nominated, we went up to his room. The brothers talked very quietly, and Jack told Bobby he wasnâ€™t going to choose Walter Reuther for Vice President. I only made one picture in there, and then I waited outside for Bobby to come out. When he did, he was furious. We were walking back down the stairs, and Bobby was hitting his hand like this, saying â€œShit, shit, shit.â€ You know, he really hated Johnson. "