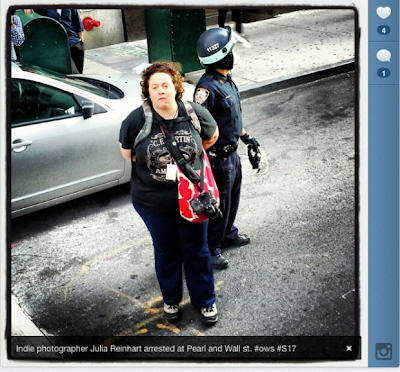 "One officer repeatedly shoved photographers with a baton and a police lieutenant warned that no more photographs should be taken. â€œThatâ€™s over with,â€ the lieutenant said."

UPDATE: The detention of journalists again brought back memories of last fall, when the NYPD on occasion arrested journalists wearing NYPD credentials.

Two Photogs, One Journalist Arrested as Activists Descend Upon Wall Street for Anniversary

Student editor arrested while covering Occupy Wall Street anniversary protests
Ironically, the arrests take place on Constitution Day, a day which Congress has set as a day to celebrate, study and discuss the United States Constitution, including the Bill of Rights.

Civil Rights and Press Freedom One Year After Occupy 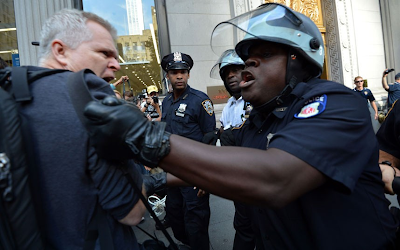 NPPA has been receiving reports from a number of our members who are covering the OWS demonstrations in NY. We are deeply concerned and troubled by the aggressive and indiscriminate manner in which officers and command staff are allegedly treating those exercising their First Amendment rights to photograph and record matters of public concern on the streets of NY. These acts of intimidation, detention and sometimes arrest continue to occur despite Commissioner Kelly's Finest message (reminding 'members of the service of their obligations to cooperate with media representatives acting in a news-gathering capacity at the scene of police incidents'), issued last year in response to the arrests of journalists covering the events in and around Zuccotti Park, as well as specific directives in the NYPD Patrol Guide regarding the rights of "Observers at the scene of Police Incidents."

It should also be noted that whereas the Tampa and Charlotte-Mecklenburg Police Departments chose to work with NPPA and other organizations in order to prevent these incidents during the recent political conventions held in those cities (where no journalists were arrested), the NYPD has declined to accept similar offers of training. While NPPA appreciates the fact that NYPD has adopted the above referenced guidelines, without proper training and appropriate disciplinary action, those directives are just pieces of paper.