"how news coverage from Ferguson, Mo., ended up in one of the world's foremost art photography shows" 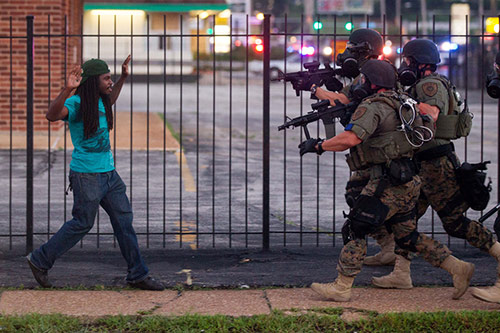 
Via Full Frame
Global Images and the stories behind them
The Christian Science Monitor
By Ann Hermes, Staff Photographer


Boston — It’s easy to be overwhelmed by the range of photo exhibits – from new experimental artists to historic documentary works – at the Association of International Photography Art Dealers show in New York City. What is harder to find at AIPAD are modern works of photojournalism. This is part of the reason that scenes from the racial turmoil in Ferguson by photojournalist Whitney Curtis stood out. Her work was exhibited by the Monroe Gallery of Photography there. To get a better sense of how images from Ferguson moved from the pages of a newspaper to a framed exhibit at an international art photography show, I caught up with gallery owner, Sid Monroe. Here are some excerpts.


Whitney Curtis' photographs from Ferguson are featured in the exhibit "The Long Road: from Selma to Ferguson", Monroe Gallery, Santa Fe, July 3 - September 28, 2015