Iconic Monday: Is this the Best Wedding Photo Ever Taken? 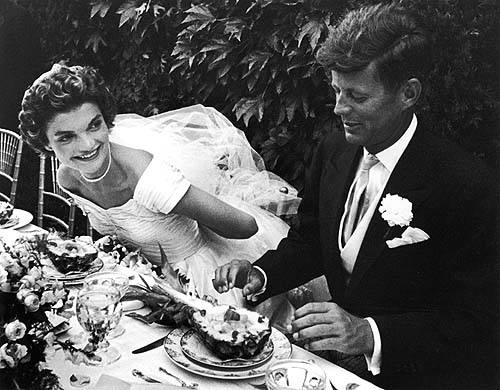 Lisa Larsen: John and Jacqueline Kennedy at their wedding reception, Newport, RI, 1953
﻿
Via  I Like to Watch
Monday, February 28, 2011

The Blog of Writer and Editor David Schonauer

Last week I wrote about the engagement of Charles, the Prince of Wales, and Diana Spencer. To be more precise I wrote about a few pictures that captured that captivating event in 1981. For this Iconic Monday, we'll stay with love, or if not love with marriage. I have a nomination for the best wedding photo ever taken. It was taken on September 12, 1953, by Life magazine photographer Lisa Larsen, at the wedding of John F. Kennedy and Jacqueline Bouvier in Newport, Rhode Island.


Undoubted I am drawn to this picture because of the Kennedy glamour. Kennedy weddings are about as close as we Americans come to royal weddings; their nuptials have combined romance and history in varying amounts. This photo seems loaded with both: Though JFK was still nearly seven years away from being elected President of the United States, I believe I can see here, in the sparkling presence of bride and groom, the first glimmerings of Camelot. (Or maybe it's just me; this is what happens when you look at photographs too much: They start speaking to you, and you can't be sure whether they're being entirely trustworthy.)

At any rate, Life.com has the contact sheet with this frame and Larsen's outtakes. So you can judge for yourself what kind of photographic gifts she brought to the wedding. Feel free to offer up other great wedding photos to compare.

I think I also admire the picture because of the photographer, who packed a little glamour of her own. Larsen was born in Germany and came to New York at age 17 after graduating from college. She was fluent in French, English, German, and had some Danish and Russian. She worked as a photographer for Vogue, Parade, Glamour, Holiday, and other magazines before being hired by Life as a contract photographer in 1950.

She did all kinds of assignments, surviving a trip into the Himalayas, trekking into Outer Mongolia (she was the photographer to do so after a government-enforced ten-year ban). The great photographer and Life historian John Loengard once characterized her to me as the "glamour girl" of photojournalism because she was so adept at endearing herself to people--particularly people who were newsworthy. According to Loengard, the Soviet Premier Nikita Khrushchev once gave her a bouquet of peonies, and North Vietnamese President Ho Chi Minh said, "If I were a young man, I'd be in love with you." (Sort of makes you wonder if we might have found a better way to fight the Cold War, doesn't it?) She was fabulous looking, and warm, and she made the people she photographed look that way, too.

Larsen was diagnosed with breast cancer in 1957 and underwent surgery. She came back full of high spirit and ready to resume her career, but in fact she was not well. She died in March, 1959, 52 years ago, at age 34.

President Kennedy would die some four years later, a little more than ten years after Larsen took pictures at his wedding.