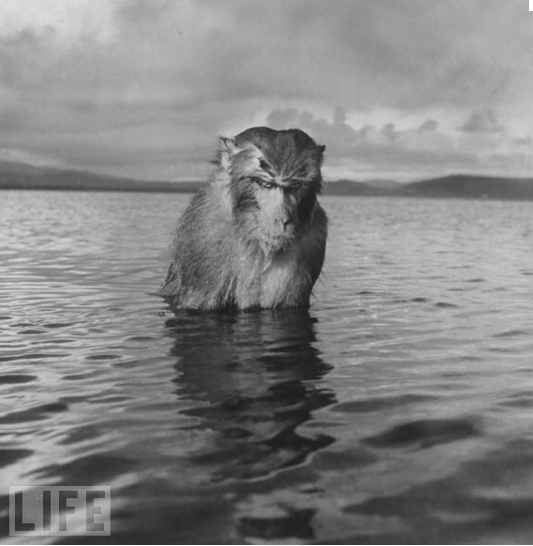 
Mieth called the picture "The monkey on my back."


Last week I focused on the iconic photos of the first chimp in space. This Monday I thought I'd stay with man's ancestors and look at one of my favorite iconic Life magazine picturesâ€”Hansel Mieth's portrait of a runaway rhesus monkey in Puerto Rico.

The image became a Life favorite after it's original publication in 1938. Over the years it's been reprinted in books countless times and sold as a poster. Mieth took many fine pictures for Life, but this is the one she became known forâ€”which is she called the photo "the monkey on my back."

The explanation for its lasting impact? Probably the monkey's expression, which has been variously described as heartbreaking, sullen, and just plain P-Oed. I would go with P-Oed, but for all I know this may be the default expression of rhesus monkeys in repose. Let's agree that the face has left generations of viewers a bit...uneasy.

According to Mieth, a Life writer took one look at the image and said, "That's Henry Luce!" When a mean-looking monkey reminds you of your boss, you know it's trouble. Maybe when we look at Mieth's monkey we all simply see a face we're familiar with. 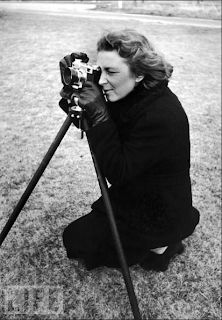 The story behind the picture is interesting, but not nearly as interesting as Mieth herself, and that's really why I wanted to write about her monkey today. Her life's story has been told in documentary called Hansel Mieth: Vagabond Photographer, which aired on PBS in 2003. As the title suggests, she was something of an iconoclast, and she never fit easily into the world of middle-class values embraced, extolled, and (in her case) enforced by Life magazine's editors. But as John Loengard, the legendary former director of photography (and foremost historian) of Life has written, the tale of Mieth's life and career was also a love.

She was born Johanna Mieth in Oppelsbohm, Bermany in 1909, but her father nicknamed her Hansel. At age 15 she left home with her teenage lover, Otto Hagel, began rambling through Europe on a romantic jaunt that wold last nearly 60 years. 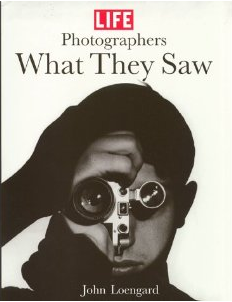 "We lived with a goup of teenagers under a bridge over the Danube river," she once told Loengard, who interviewed her for his book Life Photograpers: What They Saw. "I had a guitar, and Otto had a violin. In the 1920s you could get along that way in Austria." Once they stayed in a monastery in Yugoslavia for six weeks, Mieth dressed as a boy in short leather pants. They eventually started making a little money taking pictures and writing short articles for newspapers. When Hilter rose to power, Hagel went to America on a boat carrying canaries. She followed later. Eventually they found themselves in Depression-era California, continuing their photographic work by documenting amigrant farm laborers. Mieth started working for the Works Progress Administration.

"We were idealistic liberals," she told Loengard. "And what happens to liberals? Nothing. They lose their shirt."

In 1936, David Hulburd, the head of the Time Inc. office in San Francisco, asked Mieth if she wanted to work for Henry Luce, who was not an idealistic liberal, as a Life stringer. She shot a story on a sheep farm in Red Bluff, California, and one of her pictures made the magazine's cover. In 1937 they offered her a staff job. "I must have been a little hungry or something, because I said OK," she told Loengard. She bcame the magazine's second female staff photographer, the first being Margaret Bourke-White, whom Mieth befriended when she moved (with Hagel) to New York. "Once she admired a black velvet dress with red heart buttons that I was wearing," she recalled. "She came back a little later and handed me a package and said we should be friends together. When I unwrapped it, I found a nice red compact in a heart shape made of good leather, just like the buttons I had on my dress." 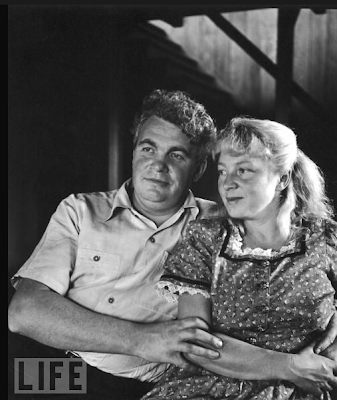 Otto Hagel and Hansel Mieth (undated)
Hagel became a well known photographer in his own right. He and Mieth were, as she put it later, happily "living in sin" when Life editors, who felt they needed to protect the magazine's image, started looking at them with expressions somewhat like that of her rhesus monkey. To appease the editors, Mieth and Hagel applied for a marriage license. While they were waiting for it, Robert Capa appeared at the magazine's office saying his visa had been cancelled. He had to leave the country...or marry an American citizen. He had a girl willing to do him the favor, and they all got married at the same time in a quickie ceremony.

In 1941, said Mieth, "life in New York was a little tooâ€”if not hectic, at least it didn't make a great deal of sense." Mieth and Hagel moved back to California. It was Mieth's idea, and Hagel said, "Where you go, I go." She continued working for Life, while he shot for other magazines. FDR was an admirer of Hagel's documentary work. Once, when Hagel was in Cuba on assignment, Mieth's phone rang. "It was Steve Early, Roosevelt's press secretary. He said the president wants to speak to Otto. I said Otto is not here....Five minutes later, the phone rang again, and it was Roosevelt himself, and he said, 'I want to speak to my boy.'"

"Your boy's not here," Mieth told the president.

In the 1950s, Mieth and Hagel refused to testify before the House Un-American Activities Committee; that helped bring an end to Mieth's prickly relationship with Life. They had a ranch in Santa Rosa, California, where they raised livestock. Hagel died in 1973. Mieth died in 1998.

It was back in 1938 that she went to Puerto Rico to shoot a Life story on a Harvard Medical School project to study freed rhesus monkeys. One day, a boy came running up to her and said that a monkey had gotten away and was in the water nearby. Mieth pursued the animal. "I came down, and that monkey was really going hell-bent for something," Mieth recalled. "I said, 'I better go in and get him,' [and] I threw my Rolleiflex on my back and swam out." The monkey, standing on a corral reef, looked at her. "I don't think he liked me, but he sat on that corral reef there, and I took about a dozen shots," she told Loengard.

Mieth took plenty of pictures on the assignment, but the magazine ran only the one that looked like Henry Luce. Loengard asked Mieth if she thought the monkey looked like Luce, and she replied thoughtfully, "I didn't see Luce that much. He had lots of other things to do rather than talk with photographers. The photographers were a low group of animals then. But I suppose it does in a way. It all depends on what kind of mood you are in. To me it looks like the monkey's depicting the state of the world at the time."