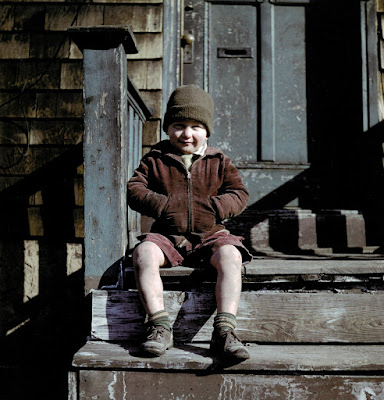 Santa Fe, NM -- Monroe Gallery of Photography is honored to announce an exhibition of rare color photographs Ida Wyman made in East Harlem, New York, in 1947. The exhibit opens in the Gallery (no reception)  and on-line at www.monroegallery.com on Friday, February 12 and continues through April 11.

East Harlem in 1947 was a neighborhood of immigrants from poor and working class backgrounds. In the Depression and New Deal era of the 1930s, the Photo League was formed to document poverty and other social problems. Idaâ€™s youthful idealism attracted her to the League, and several League photographers embarked on a mission to document conditions in Harlem.

Her photographs reveal the extraordinary within what, at first glance, might appear to be otherwise unremarkable. Reflecting the related practices of documentary photography, photojournalism, and street photography, these images are a testament to Wymanâ€™s abiding curiosity about the human condition and the complexity of human experience, both familiar and unfamiliar.

This series of color Ektachromes Ida made of East Harlem in 1947 were discovered in her archive only recently, and exist as the only color body of work from that period.

Although not as famous as some of her contemporaries, Ida was one of the defining artists of early street photography that helped shape how we look at our world. Wymanâ€™s photographic vignettes of life in urban centers and small towns in the United States, taken during the mid-twentieth century, illuminate the historical moment while providing a deeply humanist perspective on her subject

Ida strived to capture everyday life of everyday people in all its frustrating, illogical and banal glory.

The daughter of Jewish immigrants from Eastern Europe, Ida Wyman was born March 7, 1926 in Malden, Massachusetts. The family soon moved to New York, where her parents ran a small grocery store in the Bronx. Her parents bought her a box camera when she was 14, and she joined the camera club at Walton High School, honing her skills at taking and printing pictures. By the time Wyman was 16, she know that she wanted to work as a photographer. Opportunities then were few for women photographers, but in 1943 Wyman joined Acme Newspictures as a mail room â€˜boyâ€™; pulling prints and captioning them for clients. At lunch hour, she photographed nearby laborers and office workers with her Graflex Speed Graphic camera.

When the war ended, Acme's only female printer was fired so a man could have her job. Wyman set out on her own to begin free-lance work for magazines, and her first photo story was published in LOOK magazine the same year. By 1948 she was in Los Angeles, working on assignments for LIFE magazine. She would eventually cover over 100 assignments for LIFE.

For the next several years, Wyman covered assignments for LIFE, Fortune, Saturday Evening Post, Parade, and many other leading publications of the time. Her varied assignments always focused on human-interest stories, which have become a hallmark of her work.  From 1951 through 1962, Wyman took time to raise a family, as well as handling many corporate assignments.  From 1962 to 1968 she created photographic documentation for speech research projects at Haskins Laboratories in New York City.  From 1968 to 1983, Wyman was the Chief Photographer in the Department of Pathology at Columbia Universityâ€™s College of Physicians and Surgeons.  In 1983 she again returned to free-lancing, and handled assignments for The New York Times, Gannett Newspapers, US Magazine, American Lawyer, Inc. Magazine, and other publications.  Throughout her career, Wyman held numerous teaching positions and speaking assignments.  Her photographs are in the collections of the New York Public Library, the Museum of Modern Art in New York, the Jewish Museum of New York, FundaciÃ³n Municipal de Cultura in Valladolid, Spain, and other collections. She died July 13, 2019 at age 93.

Current Gallery hours are 10 to 3 Monday - Thursday, 10 to 4 Friday and Saturday, admission is free. Covid-19 safety protocols must be followed and face masks are required throughout your gallery visit. Gallery capacity is limited to no more than 10 visitors..