Barry Blitt drew the January 26, 2015 cover, inspired by the photographs of the Selma-to-Montgomery march that are everywhere again. “It struck me that King’s vision was both the empowerment of African-Americans, the insistence on civil rights, but also the reconciliation of people who seemed so hard to reconcile,” he said. “In New York and elsewhere, the tension between the police and the policed is at the center of things. Like Trayvon Martin and Eric Garner, Michael Brown and Officers Wenjian Liu and Rafael Ramos, Martin Luther King was taken way too early. It is hard to believe things would have got as bad as they are if he was still around today.”
Steve Shapiro's iconic photograph from the Selma March: 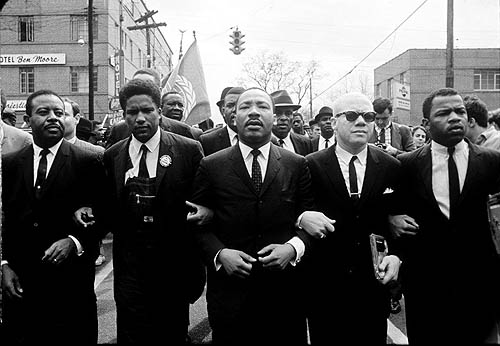 Selma: 50 Years
"Yet it was the exhibition titled Selma: 50 Years at the Monroe Gallery booth that held the most weight at the fair"