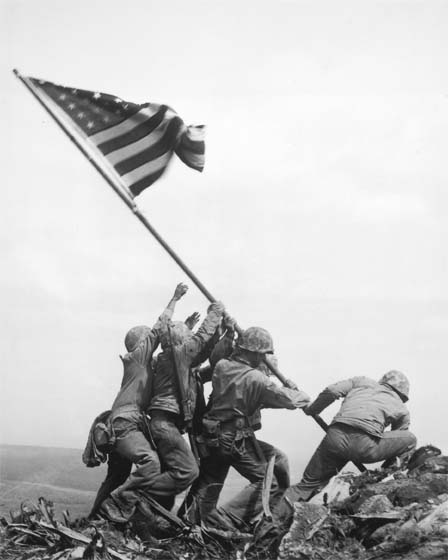 Joe Rosenthal: Marines of the 28th Regiment of the 5th Division Raise the American Flag Atop Mt. Suribachi, Iwo Jima, 1945
﻿
Iwo Jima was the costliest battle in Marine Corps history. Its toll of 6,821 Americans dead, 5,931 of them Marines, accounted for nearly one-third of all Marine Corps losses in all of World War II.


Shortly before 2am on Feb. 19, 1945, the Navy's big guns opened up on Iwo Jima again, signaling the beginning of D-Day. After an hour of punishment, the fire was lifted, leaving Iwo smoking as if the entire island were on fire.

Both Americans aboard their transports and the Japanese in their caves looked to the skies now. One-hundred-ten bombers screamed out of the sky to drop more bombs. After the planes left, the big guns of the Navy opened up again.

At 8:30am, the order, "Land the Landing Force," sent the first wave of Marines towards the deadly shores. Once ashore, the Marines were bedeviled by the loose volcanic ash. Unable to dig foxholes, they were sitting ducks for the hidden Japanese gunners.

Heavy fire made it impossible to land men in an orderly manner. Confusion reigned on the beaches.

The battle was unique in its setting. One hundred thousand men fighting on a tiny island one-third the size of Manhattan. For 36 days Iwo Jima was one of the most populated 7.5 miles on earth.

Joe Rosenthal's story, told again and again with virtually no variation over the years, is this:

On Feb. 23, 1945, four days after D-Day at Iwo Jima, he was making his daily trek to the island on a Marine landing craft when he heard that a flag was being raised atop Mount Suribachi, a volcano at the southern tip of the island.

Marines had been battling for the high ground of Suribachi since their initial landing on Iwo Jima, and now, after suffering terrible losses on the beaches below it, they appeared to be taking it.

Upon landing, Rosenthal hurried toward Suribachi, lugging along his bulky Speed Graphic camera, the standard for press photographers at the time. Along the way, he came across two Marine photographers, Pfc. Bob Campbell, shooting still pictures, and Staff Sgt. Bill Genaust, shooting movies. The three men proceeded up the mountain together.

About halfway up, they met four Marines coming down. Among them was Sgt. Lou Lowery, a photographer for Leatherneck magazine, who said the flag had already been raised on the summit. He added that it was worth the climb anyway for the view. Rosenthal and the others decided to continue.

The first flag, he would later learn, was raised at 10:37 a.m. Shortly thereafter, Marine commanders decided, for reasons still unknown, to replace it with a larger flag.

At the top, Rosenthal tried to find the Marines who had raised the first flag, figuring he could get a group picture of them beside it. When no one seemed willing or able to tell him where they were, he turned his attention to a group of Marines preparing the second flag to be raised.

Here, with the rest of the story, is Rosenthal writing in Collier's magazine in 1955:

"I thought of trying to get a shot of the two flags, one coming down and the other going up, but although this turned out to be a picture Bob Campbell got, I couldn't line it up. Then I decided to get just the one flag going up, and I backed off about 35 feet.

"Here the ground sloped down toward the center of the volcanic crater, and I found that the ground line was in my way. I put my Speed Graphic down and quickly piled up some stones and a Jap sandbag to raise me about two feet (I am only 5 feet 5 inches tall) and I picked up the camera and climbed up on the pile. I decided on a lens setting between f-8 and f-11, and set the speed at 1-400th of a second.

"At this point, 1st Lt. Harold G. Shrier ... stepped between me and the men getting ready to raise the flag. When he moved away, Genaust came across in front of me with his movie camera and then took a position about three feet to my right. 'I'm not in your way, Joe?' he called.

"Out of the corner of my eye, as I had turned toward Genaust, I had seen the men start the flag up. I swung my camera, and shot the scene."

Rosenthal didn't know what he had taken. He certainly had no inkling he had just taken the best photograph of his career. To make sure he had something worth printing, he gathered all the Marines on the summit together for a jubilant shot under the flag that became known as his "gung-ho" picture.

And then he went down the mountain. At the bottom, he looked at his watch. It was 1:05 p.m.

Rosenthal hurried back to the command ship, where he wrote captions for all the pictures he had sent that day, and shipped the film off to the military press center in Guam. There it was processed, edited and sent by radio transmission to the mainland.

On the caption, Rosenthal had written: "Atop 550-foot Suribachi Yama, the volcano at the southwest tip of Iwo Jima, Marines of the Second Battalion, 28th Regiment, Fifth Division, hoist the Stars and Stripes, signaling the capture of this key position."

At the same time, he told an AP correspondent, Hamilton Feron, that he had shot the second of two flag raisings that day. Feron wrote a story mentioning the two flags.

The flag-raising picture was an immediate sensation back in the States. It arrived in time to be on the front pages of Sunday newspapers across the country on Feb. 25. Rosenthal was quickly wired a congratulatory note from AP headquarters in New York. But he had no idea which picture they were congratulating him for.

A few days later, back in Guam, someone asked him if he posed thepicture. Assuming this was a reference to the "gung-ho shot," he said,"Sure."

Not long after, Sherrod, the Time-Life correspondent, sent a cable to his editors in New York reporting that Rosenthal had staged the flag-raising photo. Time magazine's radio show, "Time Views the News," broadcast a report charging that "Rosenthal climbed Suribachi after the flag had already been planted. ... Like most photographers (he) could not resist reposing his characters in historic fashion."

Time was to retract the story within days and issue an apology to Rosenthal. He accepted it, but was never able to entirely shake the taint Time had cast on his story.