From 1892 to 1954, over twelve million immigrants entered the United States through the portal of Ellis Island, a small island in New York Harbor. Ellis Island is located in the upper bay just off the New Jersey coast, within the shadow of the Statue of Liberty. Through the years, this gateway to the new world was enlarged from its original 3.3 acres to 27.5 acres mostly by landfill obtained from ship ballast and possibly excess earth from the construction of the New York City subway system. 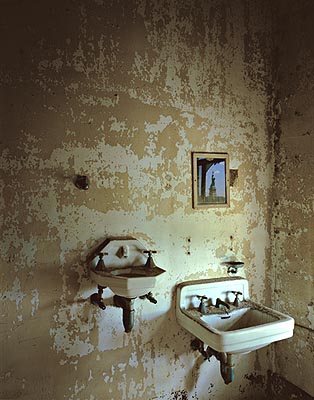 Stephen Wilkes: TB Ward, Statue of Liberty, Island 3, Ellis Island
Prior to 1890, the individual states (rather than the Federal government) regulated immigration into the United States. Castle Garden in the Battery (originally known as Castle Clinton) served as the New York State immigration station from 1855 to 1890 and approximately eight million immigrants, mostly from Northern and Western Europe, passed through its doors. 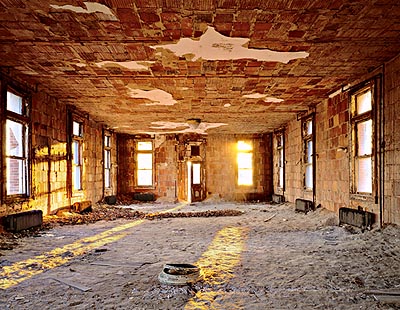 Stephen Wilkes: Woman's Ward, Island 2, Ellis Island
It soon became apparent that Castle Garden was ill-equipped and unprepared to handle the growing numbers of immigrants arriving yearly. Unfortunately compounding the problems of the small facility were the corruption and incompetence found to be commonplace at Castle Garden.

The Federal government intervened and constructed a new Federally-operated immigration station on Ellis Island. While the new immigration station on Ellis Island was under construction, the Barge Office at the Battery was used for the processing of immigrants. The new structure on Ellis Island, built of "Georgia pine" opened on January 1, 1892; Annie Moore, a 15 year-old Irish girl, accompanied by her two brothers entered history and a new country as she was the very first immigrant to be processed at Ellis Island on January 2. Over the next 62 years, more than 12 million were to follow through this port of entry.