Jeff Widener: "Tank Man because that image will always validate that I was on this planet"

Via The Eye of Photography 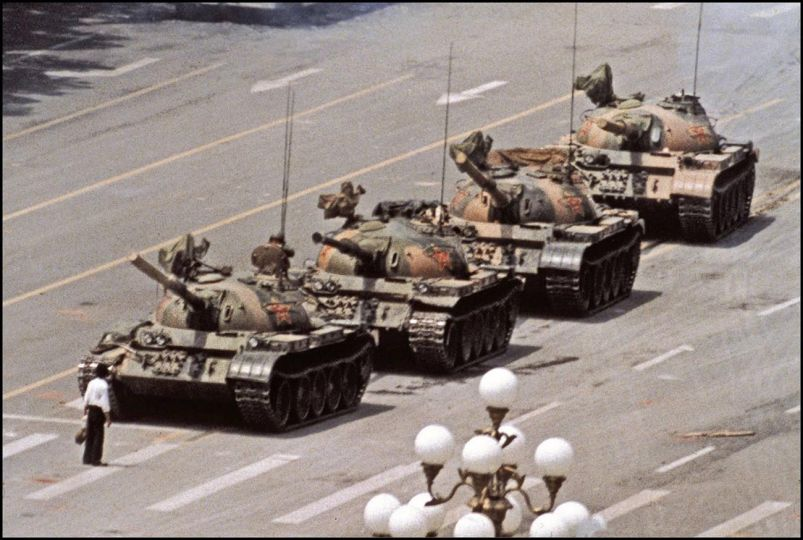 Jeff Widener: In the heart of current events

Best known for his photograph of the man facing the tank during the 1989 Tiananmen uprising in Beijing, “Tank Man”,  – an image that made the front page of many newspapers and magazines at the time and made him a finalist for the 1990 Pulitzer Prize – Jeff Widener is a highly respected photojournalist who has received many awards for his work (Columbia University’s DART Award, Harry Chapin Media Award, Casey Medal for Meritorious Journalism, France’s Scoop Award, etc.)…

Widener grew up in Southern California where he attended Reseda High School, Los Angeles Pierce College and Moorpark College, majoring in photojournalism. In 1974, he was awarded the Kodak Scholastic National Photography Scholarship, competing against 8,000 students from across the United States. The award included a study tour of East Africa.

In 1978, Widener began his career as a newspaper photographer in California and later moved to Nevada and then Indiana. At age 25, he accepted a position with United Press International in Brussels. His first assignment abroad was the Solidarity riots in Poland.

Over the years, he has covered assignments in more than 100 countries involving civil unrest and wars to social issues. He was the first photojournalist to file digital images of the South Pole. In 1987, he was hired as the Associated Press Picture Editor for Southeast Asia, where he covered major stories in the region from the Gulf War to the Olympics. Other assignments included East Timor, Afghanistan, Cambodia, Burma, Syria, Jordan, India, Laos, Vietnam, Pakistan and many others.

Jeff Widener : I still have the photograph. It was taken in 1967 of my grandfather walking to our house in Canoga Park, California. The camera was a Kodak Flashfun Hawkeye camera gifted by my parents at age 10.

The man of images who inspires you?

The image you would have liked to make?

The one you regret you didn’t made ?

Jeff Widener : More images of the Tiananmen Square uprising. I suffered a head injury the night of the massacre and I was sick with the flu. I was also just too scared.

The one that moved you the most?

And the one that made you angry?

Jeff Widener : I never took a photo that made me angry but during an Air Vietnam crash in Bangkok in the 1980’s, I witnessed a group of Thai photgraphers asking a rescue worker to hold up a severed leg of a passenger for a picture. I myself could not stomach documenting the moment.

If among your images you had to choose only one ?

Jeff Widener : Tank Man because that image will always validate that I was on this planet.

A key image in your personal pantheon?

Jeff Widener : I have to return to “Tank Man”.

The quality needed to be a good photographer?

Jeff Widener : It’s not about quality so much as having the ability to feel an emotional response from your surroundings and being able to anticipate the decisive moment before it happens.

The secret of the perfect image, if it exists?

Jeff Widener : A perfect image is one that instantly tells a story and lingers for weeks or years in your . Brain. It might remind you of a song, a past lover or period in your life. Ruth Orkin’s An American Girl in Italy 1951 is a classic example.

The person you would dream of photographing?

Jeff Widener : I have already photographed just about every head of state, member of royalty and celebrities but if I ever could have documented one group, it would have been The Beatles in their prime with total complete access. The dynamis and coverage of the world reaction would have been phenomenal.

The camera of your beginnings?

The one you use today?

The best way to disconnect for you?

Jeff Widener : Some of my favorite moments have been nights sitting alone in a third world guest house without any electrical power. It’s times like that while sitting in the dark where one gets lost in self reflection. Then when things get depressing, you step outside and are greeted by swaying palm trees and a night sky filled with stars. It’s times like that when I really feel alive.

An image to illustrate a new banknote?

The job you would not have liked to do?

Your greatest extravagance as a photographer?

Jeff Widener : Cost is no object on self assigned stories.

The values you wish to share through your images?

Jeff Widener : I value honesty. Journalism is a noble profession that is neutral and unbiased. Any deviation is a sacrilege to the profession.

The city, country or culture you dream of discovering?

Jeff Widener : North Pole. I have been to South Pole. After covering assignments in over 100 countries, I have found that most cultures pretty much have the same desires especially when it comes to family.

The place you never get tired of?

Jeff Widener : Depends on the what is needed. But I am partial to Tri-X 400.

Jeff Widener : Whatever is needed but I prefer natural.

The most photogenic city according to you ?

If God existed would you ask him to pose for you, or would you opt for a selfie with him?

Jeff Widener : Neither. I would just thank him.

The image that represents for you the current state of the world?

What is missing in today’s world?

And if everything was to be remade?

Jeff Widener : I would want to remember everything.