Taught again this year at the Santa Fe Photo Workshops, as I usually do. I really enjoy my occasional visits to the Southwest. Over the last few years, I’ve regularly brought my classes to the Monroe Gallery, run by Sid and Michelle Monroe. Great people, and close friends. They are the real deal.


I am very determined about this (especially when I teach young shooters who’ve never had a whiff of dektol) as a way of acquainting folks with work that is really the shoulders upon which we all stand. Digital photo fever is at an all time high, which is a great thing. It’s just important to know where we came from.

And, I have to admit, there’s the curmudgeon in me who’s determined to avoid much of the rest of the chic, super heated bubble that constitutes the Santa Fe spa/art scene, which, at least occasionally, makes me chuckle. I mean, there are so many galleries on Canyon Road, and such a cacophony of art that it veers damn close to outright tragic. I’m sure this is my own demented imagination at work, but I can conjure a day for the cognoscenti down there beginning by putting down the lemon scented loofah, removing the cucumber slices from the eyelids, rinsing off the sea salt scrub laced with all natural oatmeal and tinged with the scent of free range apricots, and chugging through gallery after gallery. In those shops are mult-hued Kokopelli statues, intricately fashioned wind chimes, and fantastically bent pieces of metalwork, many of which, to me, look like the product of a welder having a seizure. It’s all okay. Art is many things to many people.

I prefer the simple white walls and the largely monochrome environment at Monroe. Their gallery is like an oasis of unflinching, heartfelt reality in the midst of the ephemeral, land of enchantment swirl. What hangs on those walls makes a connection. Some of it entertains the eye in a delightfully kinetic way. Other pictures stir memory, nostalgia, and an echo in your head and your heart. (Where was I when this happened?) Other images up there are like a punch in the gut. 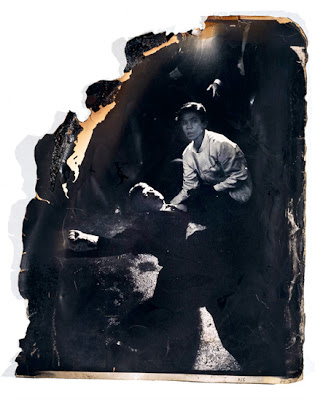 What I truly believe about a powerful picture is that after viewing it, you are never the same. You have been changed, forever. You might not realize it at that moment, but you are. There’s been an interior, seismic shift in your emotional substrata. The plates tilted, just a little bit. These pictures linger, like a persistent thought. Or, like someone shouting to you in a rainstorm, it gets your attention, even if you can’t completely make out what it’s saying. Sometimes, they’re like a wound. Photographic scar tissue.


The Monroe’s concentrate their eye and their gallery on historically important photojournalism. Even a quick pass through one of their shows is like looking at your memory of the last 50 years, right there, in one place. Currently, they have a show of Carl Mydan’s work. Carl, a diminutive, gentlemanly sort, was a giant, and a tiger with a camera in his hands. Under that affable exterior was steel. How else could he have withstood the firestorm of ego and bluster that was General Douglas MacArthur to get the pictures that he did?

Also up this fall was the work of Bill Eppridge. (Very appropriate to look at Bill’s work during campaign season, and remember that once upon a time, images of politicians had some grit, and were the product not of “photo opps,” but of real access and relationships.)

Saw Bill at Photo East, still carrying a camera. Still crusty as ever. He’s earned the right to be crusty, I can tell you. He’s done it all, and his work remains a benchmark for all of us who have ever picked up a camera with serious intent.

I won’t make a history lesson out of this, but the story of the picture above, which was on the walls of Monroe, might not be so well known. What is well known is that Epp covered RFK’s run at the presidency, and grew close with the Senator. He was there in the hotel kitchen when he was gunned down, and made that awful, famous frame of the busboy cradling the Senator’s head as he lay dying. Given the dicey light, it was a thin negative.

The Time Life photo lab, now no more, was the stuff of legend. They pulled from this neg a master, elegant print and copied it. It was from this copy neg, derived from that one print, that many, many reproductions of that moment came.

When Bill’s tenure with LIFE ended, and the weekly mag folded, he was asked if he wanted the master. In the interests of storage space, they were taking 16×20 prints and cutting them down to 11×14’s, as hard as that may seem to believe. So of course, he said yes. They said, okay, where do we ship it? Bill said nowhere, and got on a plane. He took physical possession of this legendary print, but with a profound sense of ambivalence. The night of the assassination, he did his job, magnificently. But at that terrible moment, his job entailed photographing a man he had grown close to, dying in front of him. So the print did not go on his wall. He put it out of sight, behind his couch in Laurel Canyon, California home.

Wildfires came to the canyon, and destroyed almost everything in their path. Bill’s home burned to the ground, along with just about everything in it. Except the master print, charred, as you see it above.

Some pictures just stick with you. More tk….

Related: The Albuquerque Journal: Bill Eppridge: An Eye On The Times