Joe McNally: The Real Deal: Field Notes from the Life of a Working Photographer. 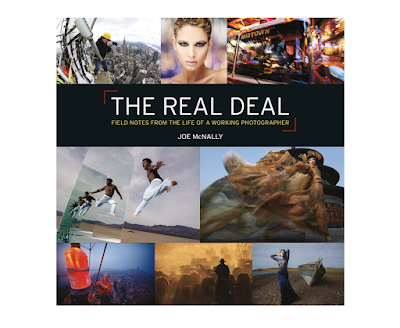 Joe McNally is up at the crack of dawn. In two days, he’ll be off to photograph the Amazon. This trip took two years to plan and has already been moved three times. Before he leaves though, he has to squeeze in a COVID-19 test—just one of many—finish programming the three Nikon Z 9 cameras that are going with him to South America, and chat with Rangefinder about his new book, The Real Deal: Field Notes from the Life of a Working Photographer.

The book isn’t what you might first expect from the internationally acclaimed photographer. It isn’t littered with how-to’s and lighting setups, though they are there. It is a beautifully written, witty snapshot of the changing life of a photographer who’s been in the business for 40 years.

It is a business. And McNally (who has no relation to the author of this article) admits that it has changed dramatically in recent times—advancing camera technology, a shift in social attitudes and the global pandemic have all seen to that. So, why write The Real Deal now? Well, like his Amazonian adventure, it’s actually taken a while to reach fruition.

When McNally, who is also a Nikon Ambassador, signed the contract with his publisher Rocky Nook five years ago, there was no deadline. “They told me to write it when I felt it,” he explains. “To write it when I could.” Today, he is grateful for his editor, Ted Waitt, and Rocky Nook’s patience. The time has allowed him to create something that he hopes is different from other how-to books.

“There is an overwhelming amount of information out there about photography and a lot of it is technique-based,” McNally says. “It’s wonderfully instructive. But what I wanted to get across was the feeling of being a photographer—the journey.”

McNally’s own 40-year creative journey leading up to The Real Deal book has seen him ascend from copy boy at New York’s Daily News, a job he almost turned down (“I wanted the title of photographer,” he says) to wire services, magazines, advertising, corporate, marketing, internet, social and, of course, digital. Thinking back to that first job, and reflecting on where he is today, he realizes how lucky he was. “As crude and humble as those beginnings were, they formed a good bedrock to jump off from,” he says. It also taught him to take risks as a photographer.

His approach is simple: “If I show up and think ‘Wow, that’s amazing, I’ve never seen anything like that before,’ then that’s what I shoot.”

On one occasion, he remembers climbing the Queensboro Bridge in New York without a safety harness or credentials to get a shot. “I vaguely said I was with the paper,” he recalls. It wouldn’t be the last time he scaled a great height to find an eye-catching viewpoint. Years later, when sent to chronicle the new docklands springing up in the East End of London, he was challenged with capturing the changes in a way different to his contemporaries. He befriended a construction worker and ended up inched out along a crane arm to photograph a bird’s eye view of the city from above.

Today, both shots would either be taken by drone or need permits and a pile of paperwork to be done in person. He seems to miss the freedom of just putting it all out there to get an exposure, and it was definitely a prompt for writing The Real Deal book. “I wanted to provide an overview of how drastically things have changed over time, while retaining the core mission of being a good storyteller,” he says.

Some of those changes have been good, but others not so much, he feels. “We live in a golden age of photography. The equipment we have is phenomenal, but the hard part is monetization. How do you make a living? How do you get someone to fund your projects?”

This is where McNally’s 40 years of industry knowledge kick in within the pages of The Real Deal book. He advises on career paths: “Drive yourself to the point of finding out what you’re really good at, what you’re happy shooting, and what you will still be happy shooting in ten years. Then follow that track,” he advises. He also emphasizes the importance of writing a coherent creative proposal, among other things. And it is all done in a compelling narrative voice.

McNally was studying to be a writer before he caught the photography bug. That connection between the written and the visual makes his memories big, bold and colorful, much like his pictures. You need only look at his portrait of a smiling Hillary Clinton or a dancer flying through the air to see the clear signatures in his work.

And there’s more to come. This year, he’s teaching a number of workshops, and he is tempted by the idea of writing again. A novel is already underway—he has, as he puts it, “some bones down on a sheet of paper.” He’s got another huge project that’s in the production stage, which is still very hush hush. But with shooting set for the first week of April, we’re bound to see some signs of it soon.

The Real Deal: Field Notes from the Life of a Working Photographer