We have held that Margaret Bourke-White, although highly acclaimed during her career years, has been largely overlooked in modern photography. We highly recommend this post from John Edwin Mason. See part One here.

Now about the mines. One thing that’s happened to me... from now on I just hate gold and diamonds.
--Margaret Bourke-White
* * *
Note: It's a sad coincidence that I'm posting this piece on the day after over 30 striking platinum miners were killed and nearly 80 were wounded by police bullets in Marikana, South Africa. When I began my research on Margaret Bourke-White's 1949-1950 South African photos nearly a year ago, I was initially drawn to the subject by her powerful and sympathetic portrait of two gold miners. [See below.] She had come to understand the exploitation and degradation that defined their working lives. For her, the men embodied the strength and endurance of all black South Africans in face of odds that were overwhelmingly stacked against them.
It will take some time for conflicting accounts of this tragedy to be sorted out. It seems clear, however, that the root causes of the strike are low wages, dangerous working conditions, and abysmal housing. Just as important is the miners' sense of having been betrayed by their union and abandoned by their government. Eighteen years after the coming of democracy to South Africa, too little has changed in the lives of the country's miners.
You can read reports about these awful events in the South African Mail and Guardian and the New York Times. The South African Daily Maverick has a good piece on the background to the strike.
* * * 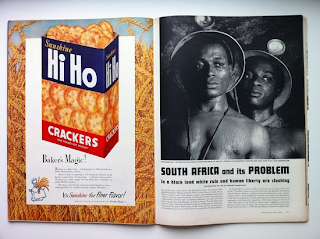 Life, 18 September 1950, pp. 110-111. [The magazine was much larger than it looks here -- approximately 14 inches high and (opened) 22 inches across.]
"Visually dazzling but surprisingly naive." In Part 1 of this brief series, that what I had to say about "South Africa Enshrines Pioneer Heroes", the first of two long photo-essays about South Africa that Margaret Bourke-White produced for Life magazine in 1950. In accounting for Bourke-White's unexpected naivete -- she was, after all, one of most highly regarded photojournalists of her generation -- I noted that she had been in the country for a very short time when she shot the story on the dedication of the Voortrekker Monument. She was also seduced, I thought, by the sheer spectacle of the occasion and the warmth of the people that she met
Full Post here.
Related: "The Daring Camera Girl"﻿