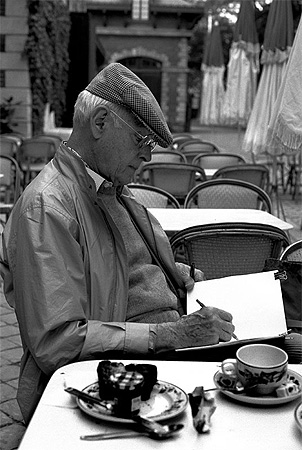 New book and show is an ode to the art form and its history
The Albuquerque Journal North
November 25, 2011
By Kate McGraw
For the Journal

Anyone intuiting that famed photographer John Loengard chose the name “Age of Silver” for his new book and show opening today at Monroe Gallery because it referred to a development process for photographs would be ... entirely correct.

“Any lens can form an image, but the way to make the picture permanent was a mystery for centuries,” Loengard said in an email interview. “In the 1830s two men, independently, discovered that using the chemistry of silver was the solution. Television, of course, is electronic photography, but silver remained the basis of still photography until the start of the 21st century. I wanted to pay tribute to silver and to a few of those who have made fabulous use of it.”

His new book is an ode to the art form  to which Loengard has dedicated his life. The exhibition of photographs opens with a reception and book signing today and continues through Jan. 29.

“I hope my enthusiasm for my subjects comes through. I got interested in photography when I was 11 years old, so I’ve spent 66 years taking pictures,” Loengard said. “Some of these photographers were my idols; some are my colleagues. I’ve edited the work of others, and I’ve hired some to take pictures. I’m immersed in photography. It’s a human occupation that I love.”

Loengard was born in New York City in 1934 and received his first assignment from LIFE magazine in 1956, while still an undergraduate at Harvard. He joined the magazine’s staff in 1961 and in 1978 was instrumental in its re-birth as a monthly, serving as picture editor until 1987.

Under Loengard’s guidance in 1986, LIFE received the first award for “Excellence in photography” given by the American Society of Magazine Editors. In 1996, Loengard received a Lifetime Achievement Award “in recognition of his multifaceted contributions to photojournalism” from Photographic Administrators, Inc. 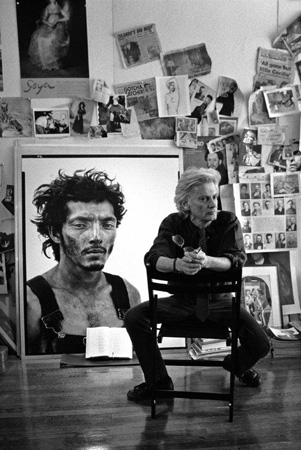 In “Age of Silver,” Loengard has focused his lens on some of the most important photographers of the last half-century, including Annie Leibovitz, Ansel Adams, Man Ray, Richard Avedon, Sebastiao Salgado, Alfred Eisenstaedt, Henri Cartier-Bresson, Harry Benson and others. Loengard caught them at home and in the studio, posed portraits and candid shots of the artists at work and at rest. It is the work of 40 years. 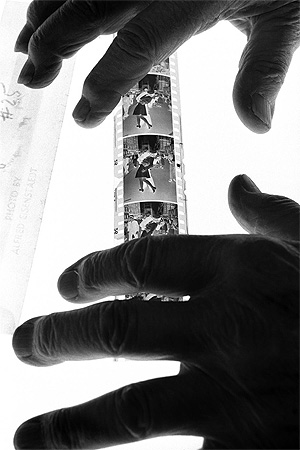 Alfred Eisenstaedt holds his negative of VJ-day celebrants New York City, 1992
“Photographers already knew it but, suddenly in the 1970s, everyone else began to consider photography an art,” he said. “Magazines started to treat photographers as artists — Ansel Adams was on the cover of Time in 1979. In the 1980s and early 1990s, I photographed a number of photographers because they had a new book or were old enough to be finishing their careers and worthy enough to notice. Working on assignment, as I did for half these pictures, had an advantage. A subject would understand why a publication like LIFE, in its great wisdom, had recognized his or her importance. We all like to be noticed. They showed themselves to the camera with an energy that might be missing otherwise. It was not vanity; they’d been asked to show themselves off.”

Far from an attempt to put forth a singular definition of modern photographic practice, this beautifully printed book instead presents evidence of the unique vision and extremely personal style of every artist pictured.

Loengard has published a half-dozen books, including “Pictures Under Discussion,” which won the Ansel Adams Award for book photography in 1987; “Celebrating the Negative,” and “Georgia O’Keeffe at Ghost Ranch.”

His book “LIFE Photographers: What They Saw” was named one of the year’s top 10 books for 1998 by The New York Times. Loengard wrote an extensive introduction for the major book “The Great LIFE Photographers,” published in 2004. “As I See It,” a monograph of his photography, was published by Vendome Press in 2005. “Image and Imagination,” a book of photographs of Georgia O’Keeffe paired by O’Keeffe paintings, was published by Chronicle Books in 2008.

His interest in O’Keeffe originally was sparked by the fact that she had been married to the photographer Alfred Stieglitz, but he grew interested in the artist herself, especially her calm attraction to the camera.

“When I photographed the painter Georgia O’Keeffe, in 1966, the fact that she was the widow of the great photographer Alfred Stieglitz was what intrigued me most,” he said. “Of course, she didn’t want to talk about him — except, maybe, a funny story about being in charge of the Stieglitz family laundry during summers in the Adirondacks at Lake George — but she had learned how she looked to the camera from the scads of photographs he’d taken of her. She was the most perfect model I have ever photographed.” 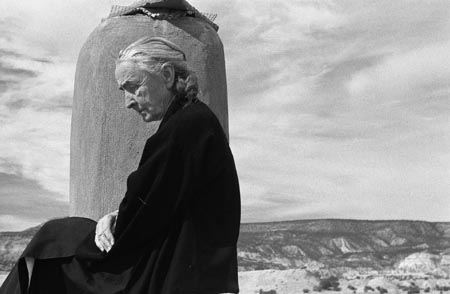 Monroe Gallery of Photography was founded by Sidney S. Monroe and Michelle A. Monroe and is celebrating its 10th anniversary this year.

“Time flies,” Sidney Monroe said. “We keep thinking we’re new, but all of a sudden we realize we’re 10 years old.” He said they regard the Loengard exhibition as a perfect celebration of 10 years in Santa Fe.
If you go:

WHAT: “Age of Silver,” photographs and book by John Loengard

WHEN: Today through Jan. 29 WHERE: Monroe Gallery of Photography, 112 Don Gaspar