John Maloof: "I had absolutely no interest in photography as an art form before I found Maier's work. She sparked my obsession in photography." 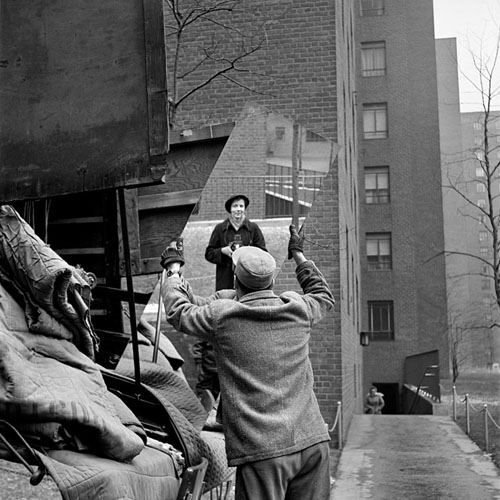 "In 2007, while seeking material for an unrelated project, John Maloof happened upon the photographic oeuvre of Vivian Maier at auction. Said Chicago auction house had acquired 10,000 rolls of her film, 20-30,000 of which were undeveloped, amongst other belongings from Maier’s neglected storage locker. Maloof’s intriguing photographic purchase would morph, unwittingly, into the kind of pivotal discovery that’s the stuff of Ali Baba’s cave: an unearthing of bounty completely undiscovered by the rest of the world.

Having no prior photography background, John Maloof was nonetheless captivated by the images he bought, to the point that it inspired him to test out street photography for himself. He stated on his blog that, when he walked the same Chicago streets that Vivian Maier had, and tried to capture what she had been able to, he “realize[d] how difficult it was to make images of her caliber.” With this realization, Maloof put Vivian Maier’s work online in order to contextualize the images within a more knowledgeable photography community. Though his impetus for making her work public was an amateur’s curiosity, the fervent reactions to Maier’s black and white photographs brought forth a tide of spellbound fans riveted by these images. Maier’s street scenes depict those authentic moments when people unsuspectingly let their guard down, and even her frontal portraits have a feeling of reveal. The subjects range from playful children to dozing elders, hardscrabble drifters to primly elegant ladies, listless young men to toiling workers: all collective participants in the rhythm of the American metropolitan landscape. " Full interview and slide show here.